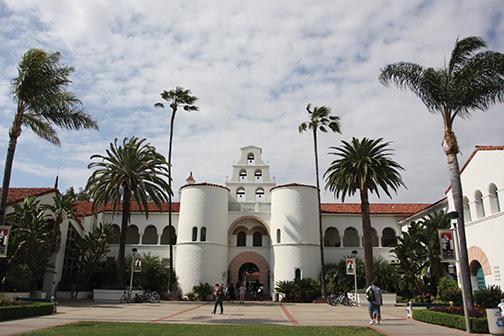 Beginning Monday, the tower of the Conrad Prebys Aztec Student Union will glow teal throughout the week to promote sexual violence awareness and prevention.

The glimmering lights will be part of San Diego State’s Take Back the Week, which includes several events and activities, such as film screenings and survivor circles, to educate the campus about sexual violence and the resources available.

“During the fall semester, SDSU, after a string of sexual assault cases, needed to have serious conversations about how to prevent sexual assault and educate students on consent,” Associated Students Vice President of University Affairs Corey Polant said.

Polant said as a result, the Sexual Violence Task Force’s communications subcommittee, which he chairs, began planning the week-long initiative toward the end of the fall semester.

“Students on campus wanted the university to create more programming and awareness for preventing sexual assault, and Take Back the Week is the perfect example of what a university, by collaborating with a diverse group of students and departments, can do to continuously make our campus safer,” Polant said.

The series of events and activities build upon Take Back the Night, The Andrea O’Donnell Womyn’s Outreach Association’s rally against sexual assault.

The Andrea O’Donnell Womyn’s Outreach Association, Aztecs for Awareness, the Center for Community Solutions, SDSU’s Let’s Talk campaign, the department of Women’s Studies and the athletic department have joined in sponsoring Take Back the Week.

“Through being involved on the Sexual Violence Task Force, I have learned about the resources we have on campus, the services we provide and the societal culture that we live in that sometimes perpetuates sexual assault,” Polant said. “As students in college, we need to challenge this culture and come together to support and educate ourselves to be better humans.”
Monday: Sexual Violence Awareness Day
The week-long initiative will begin with a ceremony at 10 a.m. at the student union. President Elliot Hirshman is scheduled to speak.

From 1:30 to 3 p.m. SDSU will host a presentation on affirmative consent in the Metzli room of the student union.

The Center for Community Solutions and Health Promotions will present workshops about healthy relationships, personal space and bystander intervention.
Wednesday: Masculinity
SDSU will screen an abbreviated version of the “The Mask You Live in,” a film about masculinity in the United States, at 5 p.m. in the student union theater. The film will be followed by a discussion with Associate Professor Frank Harris, the co-director of SDSU’s Minority Male Community College Collaborative.  A second screening will take place at 7 p.m.

A discussion about men will take place from 4:30 to 6:30 p.m at the Jeffrey W. Glazer Center for Leadership in the student union.
Thursday: Day of Healing
Student will be able to participate in a sidewalk chalk session in front of the Open Air Theatre to write inspirational words.

The Center for Leadership will host survivor healing activities from 4 to 6:30 p.m. in the Student Life and Leadership room of the student union.

A survivor’s circle will take place from 4:30 to 6:30 p.m. at the Tula Community in Tenochca Residential Hall. It will be a safe space. For more information, contact svtfstudents@gmail.com.

“The Hunting Ground,” a film about rape survivors’ struggles on college campuses, will screen at 7 p.m. in the student union’s Montezuma Hall followed by a panel discussion.
Friday: Take Back the Night
Sponsored by the Andrea O’Donnell Womyn’s Outreach Association, Take Back the Night will begin at 4 p.m. with speeches from SDSU’s Sexual Violence Task Force and WOA. The event will continue around campus and end with an event including live music and an open mic session.

Students can attend informational sessions from 12 to 1 p.m. Monday through Thursday in the student union’s Metzli room.