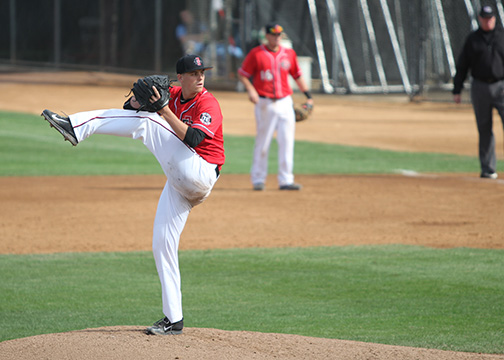 Aztecs head coach Mark Martinez praised his team for its ability to go on the road and win a series.

“Anytime you go out on the road and win two of three, it’s good.” Martinez said. “We wanted to sweep these guys, but it’s hard to win on the road.”

The two wins for the Aztecs this weekend, accompanied by University Nevada, Reno Wolf Pack’s two losses against California State University, Fresno, were enough to propel the Aztecs to the top of the MW standings.

Martinez expressed his happiness that his team was finally able to leap frog Nevada, especially after the two teams remained neck and neck for the past few weeks.

“We maintained our position in conference, and we’re alone in first place now,” Martinez said.

Friday night, junior right-hander Bubba Derby took the hill, and shut the Spartans down with a masterful stat line after his seven innings of work. Derby surrendered two runs on five hits, and struck out 10 Spartans en route to improving his record to 4-2.

The offense provided great run support for Derby, putting up 11 runs, four of which were collected in the top half of the first inning.

Brown finished the night with four hits, including two doubles and two RBIs.

Zavala had a four-hit night as well, leading the team in RBIs. One of his hits was his team-leading seventh home run on the season.

Muno’s only hit of the night was also a home run, his third on the season.

SDSU’s offense stalled a bit on Saturday. The Aztecs were able, however, to mount a comeback in the middle innings and pull off a victory.

However, in the top of the sixth, SDSU’s offense was able to break through and put up five runs.

After Muno drew a two-out bases-loaded walk, the Spartans pulled Tover and replaced him with freshman pitcher Turtle Kuhaulua.

The first batter Kuhaulua faced was Chase Calabuig, who leads the team in batting average at .404.

Calabuig was able to drive home two on an RBI single, which was then followed by a bases-clearing triple by junior outfielder Spencer Thornton.

Zavala finished the Aztecs scoring for the day in the top of the seventh, with an RBI single, as SDSU was able to cruise to a 6-1 victory.

In the series finale on Sunday, the Aztecs ran into the Spartan’s ace. Senior right-hander Kalei Contrades restricted the Aztecs to just 3 hits in his seven innings of work.

SDSU starter sophomore left-hander Marcus Reyes suffered his first loss of the season, and was pulled after 2.2 innings of work, in which he gave up five earned runs.

The Aztecs were also plagued by their defense. The defense had four errors on the afternoon.

Junior second baseman Tanner Reibenspies was able to get the Aztecs in the scoring frame in the bottom of the seventh, but it was too little too late, as the Aztecs fell 11-1.

“It was a combination of good pitching and poor at bats,” Martinez said. “(Contrades) did a good job of holding us in check, but we also didn’t string together some quality at-bats.”

Now with the sole possession of first place in the conference, the Aztecs are looking forward to an important week at Tony Gwynn Stadium, where they’ll host University California, Irvine on Tuesday, and second-place MW team Nevada over the weekend.

“It’s the top two teams in the conference,” Martinez said. “We’re going to hook up at Tony Gwynn Stadium and hopefully we get a lot of people out to support baseball.”