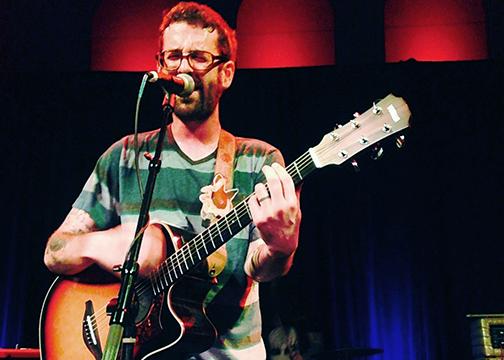 Cathartic. That’s the only way to describe Andrew Jackson Jihad’s set on April 10 at the Irenic.

Most people know AJJ for its blunt yet mocking depiction of politics, social causes, depression and self-deprecation.

The performance wasn’t about some pretentious band of musicians who think they’re sad yet cool and want the world to know. It was about a band of musicians who live and breathe the feelings that they write about. It was refreshing to watch a band not trying to give off some try-hard vibe.

The first indication was lead singer Sean Bonnette, who came out to greet the audience with a basic T-shirt, old jeans, glasses and a cheesy smile. However, Bonnette transformed into the fearless leader of AJJ as the performance started. As he sang and played, the frontman had a crazy look in his eyes with his signature propped-up eyebrow.

When AJJ started its set, the audience was in a trance. As each song progressed, the audience seemed to grip on to the music more and more. They screamed the lyrics of each song for dear life as the band sang about everyone’s greatest fears and realities. The band’s performance of “People II: The Reckoning” highlighted this the most as everyone shouted the lyrics, “Everything is real, but it’s also just as fake from your daughter’s birthday party to your grandmother’s wake.”

The show was also a joyous event of sorts. There is something comforting about connecting with people who know exactly how one feels whether that be happiness or melancholy. AJJ taught its audience that everyone should celebrate being alive and owning who they are even though the world can be a cruel and unfair place.

“Rejoice despite the fact this world will tear you to shreds. Rejoice because you’re trying your best.”

Looking into the members of the crowd, who moshed, screamed or sat staring idly, there was a connection through catharsis in the Irenic that night. When the band began the song “Free Bird,” the audience locked shoulders, swayed left and right and supported each other by singing, “That doesn’t matter to me because I see Satan’s face when I look in the mirror. I see God inside of all of the people I meet. I’m free as a bird. I’m free.”

There was a sort of relief felt from someone having the guts to sing what was on everyone’s minds or what everyone is too scared to admit.

The band ended its set with a performance of “Big Bird.” Bonnette began with a couple of somersaults on stage during the slow and quiet beginnings of the song.

As he sang the lyrics, “I’m afraid of the social laziness that let Kitty Genovese die, and I’m afraid of the mob mentality that makes otherwise normal people go blind,” the lead singer stood on the edge of the stage, screaming the lyrics until the veins in his neck popped out.

AJJ was real. The band members showed honesty not only in what they sang but the way they presented themselves. The set felt so validating, and that’s what made Friday night at the Irenic so special.