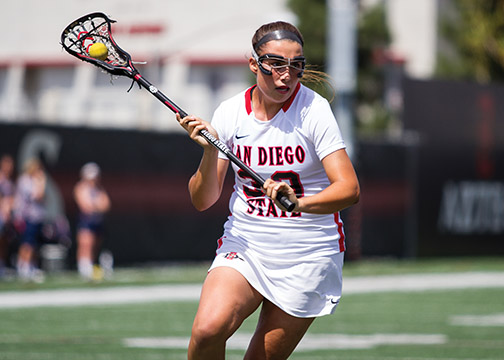 This next weekend will be pivotal for the San Diego State lacrosse team.

SDSU (8-5, 4-2 Mountain Pacific Sports Federation) is coming off two home losses, against University of Denver and University of Colorado. These were the first defeats the team has experienced in front of the home fans this season.

The Colorado game was especially devastating, allowing the winning goal with only 1:25 remaining in the game. This marked the Aztec’s third one-goal loss to Colorado in the past two seasons.

The road to the MPSF conference tournament will not be getting any easier. The Aztecs will travel to the Bay Area on Friday to face Stanford University (9-2), the No. 13-ranked team in the country. Thus far, Stanford is an unblemished 5-0 in conference play and one spot ahead of SDSU in the standings.

The challenge does not intimidate the Aztecs, who are ready to show up the high-ranked Cardinal.

“I want us to come out like we have nothing to lose and play the best game we’ve played all year,” head coach Kylee White said. “I want us to dominate in every area of the field.”

Stanford has outscored its opponents this season at an impressive mark of 172-113.

White knows the Aztecs will need to step up its offense to match up with the Cardinal, who are the third-most productive offensive team in the country with an average of 15.64 goals per game.

“We need to get on the same page, move together, and create more opportunities,” White said.

SDSU does have an advantage against Stanford in second-half scoring, which has saved the team on many occasions.

The Cardinal have scored 73 goals in the final period, while allowing 60. The Aztecs have scored 94 goals, versus 68 by their opponents.

But to pull out a victory in Palo Alto, SDSU will need to be strong the whole game.

After the showdown with Stanford, the Aztecs will head further north up the coast of California for a Sunday afternoon faceoff against University of California, Davis (3-10, 2-3 MPSF).

White trusts that her team will not experience a loss of interest after the competitive Stanford contest as it heads into its matchup with the Aggies.

“Our team is a relentless team,” she said. “We realize that every opponent in the MPSF represents a big game.”

The Aztecs have recent success facing the Aggies. They shut down Davis last year and cruised to a 17-8 victory.

To experience the same success, it will have to keep Davis’ top scorer, senior attacker Elizabeth Landry, in check. Landry has 36 goals this year, along with nine assists.

Redshirt-junior Sophie Koubek praised the Aztecs playing at this time in the season.

“We are just confident in our playing and in our chemistry,” she said.

SDSU’s chemistry and confidence will surely be tested this weekend.

Two good outings would go a long way in sending the team into the MPSF tournament with momentum.

Friday’s game against Stanford is set to get started at 7 p.m. at Cagan Stadium.

Sunday’s against UCD starts at noon on the field of Aggie Stadium.

The game in Davis marks White and the Aztecs’ final road game of the 2015 season.