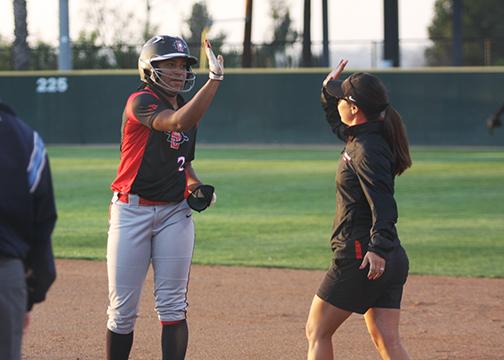 The San Diego State softball team flexed its offensive muscles this weekend in the thin Rocky Mountain air as they took down Colorado State University to take the series win 2-1.

As the forecast predicted, the opening match of the series was postponed due to inclement weather and unplayable field conditions. The conditions only set up a doubleheader, which left each team’s respective coaches desiring more out of their defenses.

Saturday’s two matches, which at times could have been easily confused for batting practice, combined for 31 runs scored on 44 hits from both teams. Add in Sunday’s combined 12 runs and 16 hits and this series was a hitter’s dream scenario.

In the opening game of the doubleheader, SDSU hit the ground running behind senior outfielder, and reigning Mountain West Player of the Week, Kayla Jordan’s leadoff homerun in the top of the first.

After allowing sophomore shortstop Haley Hutton and senior left fielder Haley David record back-to-back hits to begin the bottom of the first, Aztec sophomore pitcher Erica Romero settled down and the forced the next three batters to ground out.

The next two innings saw both teams trading runs, including another Kayla Jordan leadoff homerun to open the third inning. Romero did find herself in a jam in the bottom of the third, as she allowed a run, two hits and a walk with two outs. The Aztec pitcher forced Hutton — who went on to bat 3-4 on the game — to pop out with the bases loaded.

In the fourth inning neither team scored. In hindsight, it was the calm before the storm, as both offenses lit up the opposition’s pitchers for the rest of the game.

SDSU recorded six runs in the final three innings, which was enough to stave off CSU, as the Aztecs went on to win the game 9-7.

In the nightcap, the Aztecs continued right where they left off and took a commanding 4-0 lead, due in large part to four CSU errors. The Rams would respond with a single run to end the inning.

The ladies in red and black continued their scoring run off freshman catcher Jenavee Peres’ fielder’s choice ground out to short, before the Rams exacted revenge for their disastrous opening period. CSU torched Aztec pitcher Romero, for seven runs on five hits, including four walks, to take the 8-5 lead.

Not to be outdone, SDSU tied it in the fourth when junior third baseman Kayla Bufardeci’s groundout scored senior outfielder Briana Gamm and freshman utility player Taylor Stewart singled up the middle to score redshirt-junior outfielder Victoria Kobold and Peres.

The Aztecs would regain the lead in the top of the fifth, this time off a Bufardeci single that allowed Jordan to score.

However, the lead was short-lived as the Rams regained the lead in the bottom of the inning and held on to capture their first home conference win 10-9.

The final match on Sunday brought both teams, and their bats, back to earth, as SDSU took the game and series on an 8-4 victory.

The first inning did, however, have the makings of yet another offensive clash as the Aztecs held a 5-3 edge at the end of the first. The offensive output wouldn’t last, though, as from there the Aztecs would only score three more runs — all in the top of the fourth — off redshirt-senior utility player Lorena Bauer’s home run.

Hutton scored the Rams’ lone run outside of the first inning during the sixth on senior outfielder Shae Rodriguez’s single down the right-field line.

The lone loss to CSU was all California State University, Fresno needed to take sole possession atop the MW standings, as the Bulldogs swept Boise State University this weekend. This is the first time all season that SDSU has not been either the sole or co-leader for the top spot in the conference.