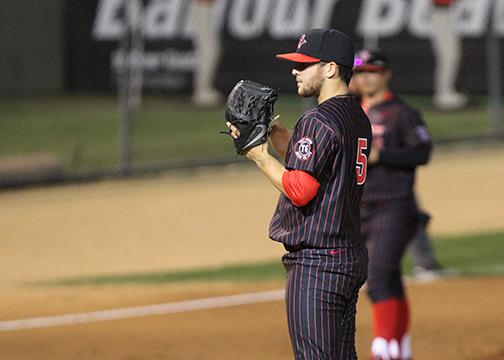 In arguably its biggest matchup of the year thus far, the San Diego State baseball team was swept — for the first time this season — by University of Nevada, Reno this past weekend at Tony Gwynn Stadium.

The Aztecs were outscored 38-12 throughout the series, and Nevada now controls first place in the Mountain West by 2.5 games.

“We ran into a really hot team,” said junior shortstop Danny Sheehan. “Hats off to Nevada, they do a lot of things well and they had our number this series.”

The sweep was the first of the season against the Aztecs and just the second time that they lost a three-game series, the other being against the University of New Mexico in March.

Junior right handers Bubba Derby and Mark Seyler had uncharacteristic struggles, which got the team off on the wrong foot early on in the series.

To couple that, the bullpen continued to have a shaky season and compounded the struggles of the starting pitchers by allowing 18 runs over the weekend.

“We knew Nevada could swing that bat,” Sheehan said. “We know we are better than that, though.”

Derby took the loss on Friday after he allowed seven runs, six earned, in his 5.1 innings pitched, as the team dropped the opener 14-3.

Saturday’s game was the closest of the three, but that was not thanks to Seyler’s starting performance, where he garnered his second loss of the season.

If not for a good offensive performance, led by a three-RBI game from Sheehan, the score would have been more out of hand.

“I have all the confidence in the world in (Derby and Seyler),” Sheehan said. “These guys have been getting it done for us all year, they will be fine.”

The team would go on to drop the final game of the series 16-4.

One of the lone bright spots over the weekend was Sheehan, who contributed five hits, four RBIs and his second home run of the season.

Nevada and SDSU have traded first place in the MW throughout the season, and the two could possibly meet again in the MW tournament in May, possibly in the finals.

Sheehan is not discouraged, though, about the possibility of a rematch.

“I know that we can play with those guys and beat them on any given day,” he said. “We’ve had a very successful season; it’s about remembering what has gotten us to this point.”

Fresno State (18-21, 9-8 MW) is currently in fourth place in the conference standings.

“The biggest thing for us is that we need to bounce back strong,” Sheehan said. “We can’t dwell on what happened over the weekend, we just need to go out there and play our game.”