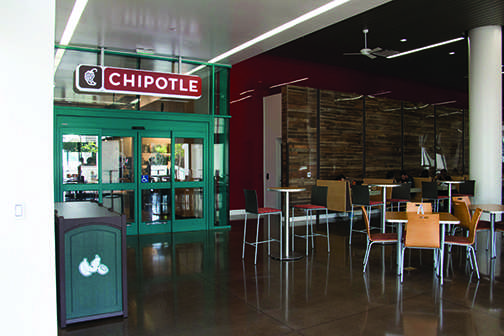 San Diego State was recently recognized by the Green Restaurant Association as the first college campus requiring all food services to meet the association’s environmental standards.

Along with meeting sustainable food standards, SDSU also received recognition as the campus with the highest concentration of green certified stadiums and arenas.

“We have the highest concentration of facilities within a college campus that are certified, and the GRA also knows that we are asking all of the operations (to) become certified in the future,” SDSU Dining Director Paul Melchior said.

Aztec Shops hopes to have all restaurants certified by September.

“It’s a goal, for all restaurants on campus to eventually be GRA certified, so the new ones that come on board will all have to be certified within a certain time frame,” said Duane Buske, Aztec Shops general manager of purchasing and distribution. “Some of the restaurants that have already been here, when their contract is up again it will be a part of their contract.”

Oggi’s, Panda Express and Chipotle are working on meeting the standards.

“We broke it into a three-year plan, so we’ve done 25 locations or something like that right now,” Buske said. “Our first initial run was last year. We did 13, so it’s been ongoing.”

Food service locations are not required to compost pre-consumer composting, but most SDSU restaurants do.

“The only one not to do it is Oggi’s, just because they came on a little bit later than the rest of them, but they will be doing it by the end of the semester,” Buske said.

The certification works off of a points system.

“What they do tell us is that we need to get a minimum number of points to get certified,” Melchior said. “So we look at all those options, we decide what makes sense for us, and then we go after those points.”

One area SDSU did particularly well in was buying sustainable food.

The certificate required 10 points, and some on-campus locations had more than 40, Buske said.

SDSU also received recognition for how quickly it received Green Restaurant Association certification. On average, it takes restaurants 18 months to get a one unit certification, Melchior said.

“It’s a tremendous amount of work,” he said. “We got the first 13 of them done in less than a year.”

“What gets acknowledged in a restaurant is green restaurant certification,” Melchior said. “So we went to students and said we’d rather get green certified.”

“(Students) are going to dictate when we do that with your purchasing, “ Melchior said. “The trend is going down, but as long as (students) keep buying it, we’re going to keep offering it.”

“Once we get certified, it’s not the end of it,” Buske said. “They’re going to keep checking up on us, so it’s not like we did all this stuff and now we’re going to back off because we’re certified.”