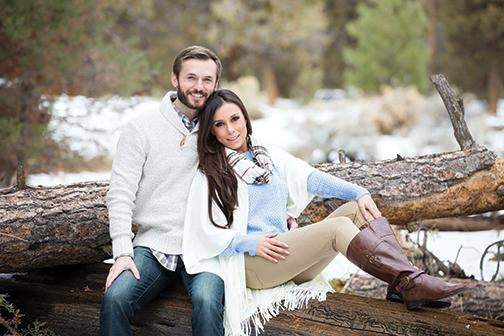 Maania Hopper is a 2010 San Diego State alumnus who studied both political science and economics. Maania had recently become engaged to University of California, San Diego medical student and SDSU kinesiology and biology alumnus Austin Hopper when she was diagnosed with a rare form of thyroid cancer called poorly differentiated thyroid cancer. In one week, Maania was able to raise more than $30,000 to help pay for a clinical trial through a Go Fund Me page.
The Beginning
Maania initially noticed a swollen lymph node while standing in line for a breakfast burrito. After an ultrasound, biopsy and several doctors visits, a University of California, Los Angeles pathologist discovered the rare form of thyroid cancer, which is only found in 5 percent of people. Maania received an expedited surgery to remove the tumor and some surrounding lymph nodes. But before the surgery, Maania and Austin rushed to a courthouse to be married.

“We were already engaged, and we wanted to go through this as husband and wife,” Maania said.

Austin and Maania were married Mar. 26, 2013 — 11 days before the surgery. “That was probably one of the more beautiful moments in life,” Maania said. “I had no idea what the next year would be like, but I was surrounded by so much love.”

Doctors decided it would be best to take a more aggressive approach to eliminate the cancer with two forms of treatment. Maania received the maximum dose of the first treatment called radioiodine therapy.

After receiving the radioiodine, Maania had to avoid contact with everyone for a month.

“The doctors basically lock you in a room in the Nuclear Medicine Department in Hillcrest because you’re literally radioactive,” Maania said.

“I could sit in a chair outside the door and talk to her,” Austin said. “Everyone else one the floor was afraid to even come near us.”

After finishing both the radioiodine and healing processes, Maania began the second treatment, which was intense radiation for an eight-week period.

“I struggled with the fatigue and nausea,” Maania said. “I got all of my nutrition and hydration intravenously, and sometimes even that made me sick.”

After undergoing both the radioiodine and radiation, doctors believed Maania to be in the clear, until scans revealed several spots on her lungs. Maania had the tumor genetically sequenced to figure out exactly which genes were mutating incorrectly.

“Our hope was that it would be a common genetic mutation,” Maania said.

“The doctors said I needed to seek out a clinical trial, to receive some sort of systematic treatment,” Maania said.
The Hunt for Clinical Trials
According to the U.S. National Library of Medicine, “Clinical trials are conducted in a series of steps, called phases — each phase is designed to answer a separate research question.”

Initially, researchers test a new drug or treatment in a small group of people for the first time to evaluate its safety, determine a safe dosage range and identify side effects.

“After the first phase, the drug being tested is made cancer specific, so rare cancers have their best shot of entering clinical trials during the first phase,” Maania said.

Maania is one of five people in the clinical trial at the Providence Cancer Center in Portland, Oregon.

“To get into a clinical trial you’re either calling at the right second or walking in at the right time because it’s very rare to be accepted,” Maania said.

Waiting lists consist of hundreds of people require a consultation by a doctor beforehand. Maania walked into the Providence Cancer Center expecting to be put on a waitlist, but that same day a new study opened up where she received a spot along with four other patients.

“Of course it is scary because it’s never been tested on humans before,” Maania said. “There are tons of side effects from all of these drugs, and doctors don’t know what the side effects are going to be.”

Maania began the first treatment in the clinical trial on March 26 and is receiving antibody immunotherapy, which turns on immune cells to attack the cancer cells. Maania is the third person to receive the immunotherapy treatment out of the group of five and is receiving the average dose. The process usually lasts for 20 minutes.

“Fifteen minutes after receiving immunotherapy, my immune system kicked in and I got the extreme sensation of being cold,” Maania said. “I could physically not stop shaking.”

“It was mildly hilarious,” Austin said. “She’s always so polite, she’s sitting there shaking horribly but apologizing the entire time.”

Maania continues to fly to Portland every three weeks for the continuation of the clinical trial.
Looking to the Future
Maania wants to increase awareness of the fact that there are one to two percent of people have poorly differentiated thyroid cancer and that there is a section of people with a rare mutation in every group of cancer patients. Maania hopes to start an organization in the future to help other people with rare cancers, and has already had a ribbon created to represent rare cancers.

“Being diagnosed with a rare cancer opens your eyes to the disparity in standard treatments options and research,” Maania said.

In the future she wants to provide resources on how to navigate through the clinical trial system, treatment options for rare cancers, as well as counseling from both emotional and mental standpoints.
Living With Cancer
Despite having a rare form of thyroid cancer, Maania still continues to work full-time, and was recently promoted to marketing communications manager at Oceanside manufacturing company La Cantina Doors. Maania said the company has been very supportive throughout her treatment. She believes her work to be part of who she is, and not an escape.

“It’s easy for people to become cancer,” Maania said. “What’s kept me strong is accepting and embracing it, but while maintaining my self identity separately.”

Before she was diagnosed, Maania considered herself to be a very private person — she even considered not telling anyone about her diagnosis to avoid being pitied by others. Maania became more open after realizing that her story may help people in similar situations.

“I’m not going to sit here and tell you ‘this is how to handle cancer,’” she said. “Everyone handles it differently, but this is how I handle it and hopefully that helps some people.”