UK band returns from across pond 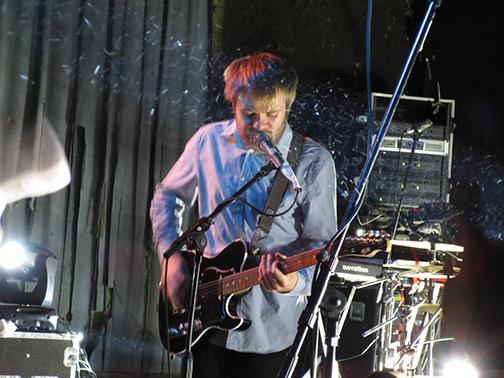 It’s no wonder why Soma’s side stage sold out on April 24. The room was filled with anticipation before the English band Enter Shikari rocked San Diego with its politically charged fusion of electronic and punk style for the first time in nearly three years. The various use of electronic and rock genres combined with Enter Shikari’s phenomenal stage presence made for an outstanding concert.

The openers did a solid job setting the mood. I The Mighty got heads bobbing with its post-hardcore music even if the guitar was slightly drowned out and some missed notes on vocals. A Lot Like Birds picked things up with a heavier, more experimental post-hardcore set list, but the crowd really came alive with Stray From The Path’s New York hardcore.

But every band paled in comparison once Enter Shikari took the stage. After opening with “The Appeal and the Mindsweep Part 1,” it felt like I was pushed for about a mile. People were stagediving as if the crowd was a swimming pool. Clothes were soaked in sweat. It was an absolute thrill being in the crowd.

The band also seemed to be having a blast. Despite the political context of most of its songs, the band never did a serious call to action during an intermission. Instead, the members did the usual things like flatter the city and quote “Anchorman.” The comedic and humble tone in between songs definitely kept the concert fun throughout the entire show.

Enter Shikari may be one of the few artists that sound just as good, if not better, live compared to their recordings. No instruments were drowned out, and all the vocals sounded superb. But that doesn’t mean it played every song the same way as the recordings. The band had a mashup of “The Last Garrison” and “Juggernauts” that connected the two songs into one. There were also dubstep interludes not from any released albums.

The stage presence during each song was something to behold. Vocalist Rou Reynolds rapped, screamed, sang and occasionally played the guitar all while managing the electronic element of the music. Guitarist Rory Clewlow would crowd surf and even put his arm around a fan on stage.

The fans fed off the performance just as Enter Shikari fed off their energy. Instead of shouting for an encore, the crowd chanted “and still we will be here, standing like statues,” a re-occurring lyric mentioned in the song “Solidarity” from the band’s second album “Common Dreads.”

With its fourth album recently out, the band has  more than 50 songs to choose from when forming a setlist. This is a double-edged sword. Each album is unique, but it also means narrowing down so many loved songs into 90 minutes while showcasing the newer pieces from new album “The Mindsweep” and the extended play “Rat Race.” At least half were newer material, and fan favorites, such as “Sorry You’re Not a Winner” and “Zzzonked,” were noticeably absent. It would have been nice to play those favorites instead of some weaker songs such as “Never Let Go Of The Microscope” from “The Mindsweep,” but it comes with the territory with a new album release.

Other small gripes include the light show. It’s been better in the past and seemed quite modest this time around, but that may have to do with being limited at Soma’s sidestage.

Minor complaints aside, Enter Shikari usually put on an amazing show, and this time was no different. Anyone who enjoys music in general should attempt to see them at least once. My only wish is it doesn’t take them another three years to come back to San Diego.