The Daily Aztec • May 4, 2015 • https://thedailyaztec.com/67118/sports/aztec-softball-sweeps-utah-state-in-record-setting-weekend/ 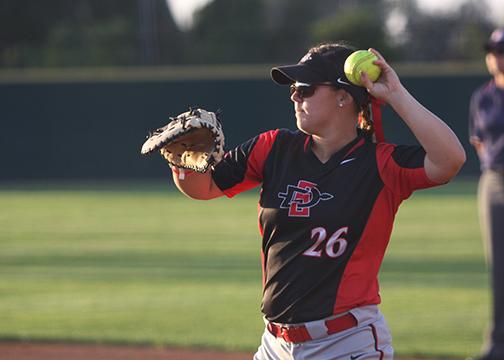 While the world was busy anticipating and watching the “Fight of the Century” between Floyd Mayweather and Manny Pacquiao, the San Diego State softball team (34-18, 18-6 Mountain West) put on its own show over the weekend, sweeping the Utah State University Aggies (16-36, 8-13 MW) to close out conference play.

Heading into the series, the Aggies were losers of eight straight and were outscored 55-16 in the process. Unfortunately  for USU, the Aztecs would not make it any easier with an offensive outburst over the weekend in Logan, Utah.

SDSU tallied at least one run in all but four of its 19 innings against the Aggies and outscored them 29-9 in the series.

The sweep keeps the Aztecs’ hopes alive of earning their fourth straight MW title, but after dropping series to both California State University, Fresno and San Jose State University, they will need a lot of outside help.

Heading into the final weekend of conference play, SDSU needs current MW leader Fresno State to be swept by the University of Nevada, Las Vegas.

It also needs  SJSU to lose at least one game against the University of New Mexico.

SDSU was the first to strike in the opening match of this weekend’s series, as redshirt-senior utility player Lorena Bauer scored on freshman catcher Jenavee Peres’ single to left-center field. USU responded in the bottom of the first on a fielding error by the Aztecs that allowed senior shortstop Jolene Koons to score.

However, the Aztecs quickly atoned for their mistake with three runs in the second. After a leadoff out, freshman left fielder Taylor Stewart and junior second baseman Stefania Aradillas hit back-to-back singles.

Stewart was replaced by redshirt-junior outfielder Victoria Kobold, and after redshirt-senior center fielder Hayley Miles hit a single to center field that was misfielded, Kobold and Aradillas came in to score.

Senior right fielder Kayla Jordan finished the scoring run with a single up the middle that brought Miles home.

The lead was pushed to 7-1 over the next three innings before the Aggies threatened in the bottom of the fifth.

After the first three batters loaded the bases and a fielding error by the Aztecs allowed two runs to score, sophomore pitcher Erica Romero recorded three straight outs to get out of the jam.

With the 9-3 victory, Romero earned her 31st win of the season, matching the SDSU all-time single-season record set by Danielle O’Toole last year.

Romero did not waste anytime to capture sole possession of the single-season win title, as she earned her school-record 32nd win of the season the next day, with the Aztecs run-ruling Utah State 10-2 in five innings.

Jordan continued her offensive dominance and hit a leadoff double in the first. After a popout, Jordan advanced to third on a wild pitch and Bauer walked. Peres then crushed a single off the right-field wall to plate Jordan with the first run of the game. Stewart then followed with a three-run homer.

The Aggies cut the Aztecs lead to 4-2 at the end of the second, but SDSU went on to score six more runs in the next three innings to end the game in five innings of action.

The final game on Sunday started out like the their previous two, with both teams scoring in the first inning. However, it was USU that held the lead heading into the third inning, 4-1.

SDSU roared back and scored the next nine runs of the game to secure its fourth conference sweep of the season and the third on the road.

Jordan finished off a fantastic week, pacing her team behind a 4-4 performance to end the series, including a home run, two RBIs, three runs  and a stolen base.

The Aztecs will finish their season at SDSU Softball Stadium in a two-game non-conference bout against the Oregon State University Beavers beginning Friday at 6 p.m.