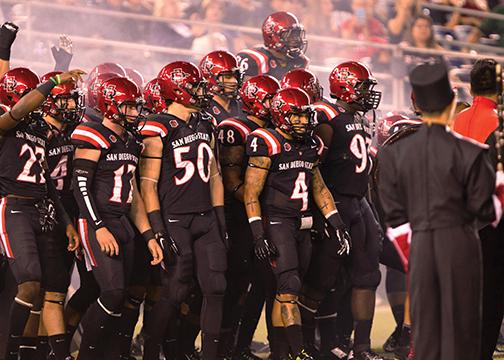 This faux-rivalry game is the first meeting between the teams in 54 years, but there is more than intercity pride on the line.

For the Aztecs, it’s a must-win game where the win yields nothing tangible, but a loss is a crippling blow to a brand new season.

This is true because SDSU and USD play in different subdivisions of college football. The Aztecs play in the Football Bowl Subdivision, which is familiar to the average fan because its best teams compete in bowl games during the holidays.

USD, however, plays in the Football Championship Subdivision, reserved for smaller schools that compete in their own postseason playoff.

Throughout college football history it has become customary for larger, stronger FBS schools to schedule FCS opponents and provide an Old-Testament-style sacrifice of a small team.

However, the tides of college football are changing and the once helpless FCS schools have started building impressive resumes of beaten FBS opponents. In the opening week of 2013 eight FCS schools beat FBS opponents.

But winning six out of nine games is hardly an accomplishment when there’s an expectation to wallop the opposition. It’s hard to count these as wins anything but averted disasters.

Bill Bender, a national college football writer for Sporting News, warns against the dangers of scheduling an FCS school.

“It’s a risk for an FBS school to schedule (FCS teams),” Bender said. “You don’t want to be, for lack of a better word, embarrassed.”

In 2013, the Aztecs were stomped 40-19 in the season opener by Eastern Illinois University, an FCS opponent.

This led to SDSU finishing with an 8-5 record and playing in the Famous Idaho Potato Bowl.

However, Bender said scheduling has become an issue for schools like SDSU.

It is stuck in the middle tier of college football, referred to as the Group of Five conferences.

Out of the 10 FBS conferences, the top five are referred to as the Power Five, which plays Saturday games on major TV networks and net tens of millions of dollars per season.

As a result, Group of Five schools have a smaller pool of teams to schedule, and may have to schedule FCS opponents out of necessity.

But beware of that land mine.

A loss to an FCS school, or low-level Group of Five school such as week-three opponent University of South Alabama, is catastrophic.

Which makes one wonder, why take the risk of scheduling lesser opponents?

It’s illogical to believe that lesser competition equals a better win-loss record and a chance to reach better bowl games or the college football playoff.

In fact, scheduling better opponents and winning tough games on the road is the proven way to increase program profile, reach more prestigious bowl games and possibly escape the Mountain West and Group of Five.

“It increases exposure. Boise State, (Texas Christian University) and (University of) Utah used that,” Bender said. “They were in a smaller conference, but they increased their exposure by playing Power Five schools and winning.”

TCU and Utah once played in the MW, but both now play in Power Five conferences and face some of the country’s top competition.

Because of conference affiliations and program success, both teams have a chance to win a national championship.

“You’re going to have to go into some big places and win some big games,” Bender said. “It’s doable.”

With current scheduling practices, the Aztecs will never play for a national championship.