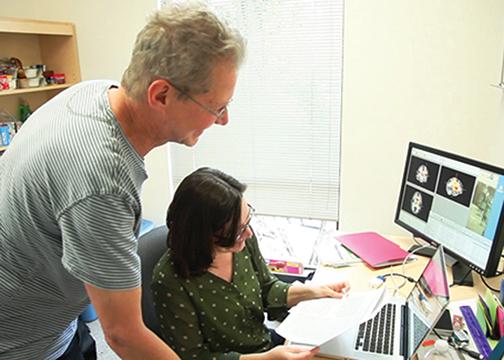 Courtesy of SDSU Department of Psychology

More than 3.5 million Americans live with autism spectrum disorder. Between 2002 and 2010 autism has increased between 6 and 15 percent each year. Despite this increase, little is known about how autism affects adults.

San Diego State researchers are launching a new study of people with autism as they age into their adult years.

Although there is an abundance of research involving children with autism, not much is known regarding adults aged 40-65.

“The vast majority of people who know about autism have only heard of children and teenagers having the problem, but they will continue to remain autistic throughout their whole lives,” Selma Star, an adult with autism, said.

With the aid of a $3.5 million grant from the National Institutes of Health, SDSU psychology professor Ralph-Axel Müller and SDSU neuroscientist Ruth Carper will embark on a five-year study looking specifically at adults who have autism.

The project is building on a study Carper began years ago which looked at the cognitive abilities of a wide range of adults with autism.

“Preliminary findings suggested that some problem behaviors may become more difficult in these individuals as they get older, but it’s still too soon to know what happens with cognition and memory,” Carper said.

Some of the people Carper previously studied will be involved in the new study.

By using previously studied participants, the researchers will be able to see how they have progressed over the years.

This study will compare 70 people with and without autism aged 45-65.

“Participants will take a series of detailed neuropsychological tests to quantify their cognitive abilities such as language, problem solving and memory,” Carper said.

They will also undergo a 60-minute brain-imaging procedure at a facility at UC San Diego. Then in two years they will repeat the procedure.

The two-year gap allows the researchers to see how the brain and cognitive functions change as each individual gets older.

This study will be administered at SDSU’s department of psychology and the SDSU Research Foundation.

All the information collected will expand the department’s atypical brain and cognitive development research.

“Since this population is so rarely studied, the project has the potential to continue for many years in the future,” Carper said.

Currently, the study is in its early phases.

Researchers are determining the data they want to collect for the study and are beginning to gather study participants. Within a couple of months the first participants will begin testing.

Once the project has concluded, the team will publish the data collected in a scientific journal, making it accessible to the public.

With this information, scientists and other research groups can develop more ways to help adults who have autism.