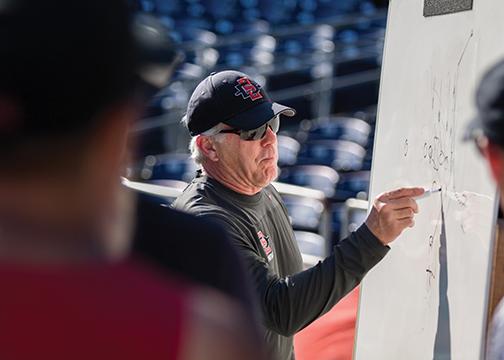 With the days dwindling down before San Diego State football’s season opener on Sept. 5 against University of San Diego at Qualcomm Stadium, big questions are finally being answered.

Head coach Rocky Long at last acknowledged the elephant in the room and confirmed graduate-transfer Maxwell Smith will start at quarterback against the Toreros after practice Monday.

Quarterbacks coach Blane Morgan agreed with Long and added that Smith’s maturity played a role in earning the starting nod.

“He brings a little more vocal leadership to the team and in team environments he was more successful,” Morgan said.

It doesn’t come as a huge surprise to see that Smith edged out redshirt-freshman Christian Chapman. Smith consistently outplayed him in practice, albeit not by a considerable margin.

That’s not to say Smith is the clear-cut starter.

“Christian had a really good fall,” Morgan said. “It wasn’t an easy decision, it certainly wasn’t.”

Holmes is MIA once again

Four-star freshman wide receiver prospect Desean Holmes is missing again. This time, though, it appears Holmes is gone for good.

The man who played “Where’s Waldo” with the Aztec coaching staff during the summer, but ultimately came out of hiding prior to the beginning of school, is nowhere to be found.

“He didn’t show up to weights one day,” Long said. “We went over to check his room and he moved out. He was all packed up and gone.”

Long said he last saw Holmes on Thursday. He isn’t interested in finding the San Fernando Valley native this time, who again gave no warning of his departure.

“That young man has more problems than we can handle,” Long said. “We do not want him back.”

Holmes was also reported to not have attended any of his classes the first week of school.

New helmets get a test run

The Aztecs practiced in their new helmets for the first time Monday and they are already a hit with a few of the players.

After a run up the middle that resulted in a touchdown, junior running back Donnel Pumphrey told senior kicker Donny Hageman on his way back to the huddle, “I told (the defense) not to touch my helmet.”

The public will get their first opportunity to see the new helmets and jerseys in action this Saturday against the Toreros.