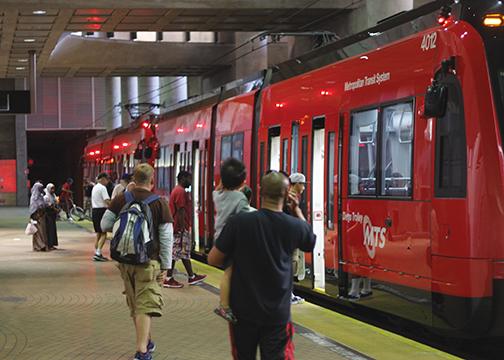 An unidentified man was disturbing the peace on Campanile Walkway near the Adams Humanities building last Friday around 11 a.m.

He was reportedly bothering the public by preaching about religion, according to a media bulletin.

When SDSUPD arrived the subject was gone.

Hours later, just after 3 p.m., a trolley rider reported a man brandished a knife after he was asked to stop smoking on the trolley’s west-bound platform at the SDSU station.

The man was reportedly in his 20s, had a shaved head and was wearing a bright blue shirt.

Peterson said the reporting party was uncooperative after the subject left on the trolley station. SDSUPD were unable to locate the reported offender.

Minor in possession of alcohol

Officers arrested an SDSU student for having alcohol in public on Saturday night at the 5600 block of Lindo Paseo, according to a media bulletin.

The student was cited and released from the scene with a written notice to appear, Peterson said.

Later that night SDSUPD arrested a minor for public intoxication at Buddies Burgers around midnight.

The subject was released into parental supervision early the next morning with a written notice to appear for the violations.