Ryan Lindley looking for next stop in NFL 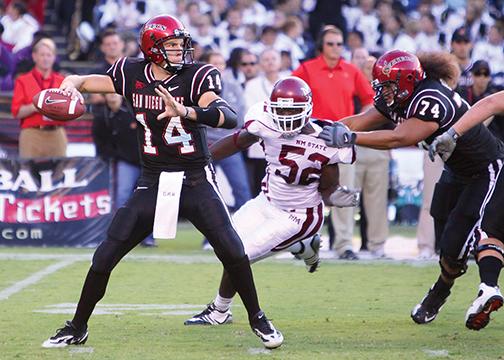 There’s a mantra among players and coaches in the NFL that when somebody gets injured, it’s on the next man up to go in and fill the role.

No one may have better exemplified that last year than former San Diego State quarterback Ryan Lindley, who was forced into action for the Arizona Cardinals.

After both quarterbacks in front of him suffered season-ending injuries, it was on Lindley to lead the team in its wild-card round playoff game against the Carolina Panthers, which Arizona lost 27-16.

Lindley admitted it was a dream come true to start in the playoffs, but the game didn’t necessarily pan out like he had hoped.

“Any experience like that is never going to be perfect. You’re always going to pick apart the little things, which makes it a little harder to enjoy,” he said.

“I’m just lucky enough to have a great family to keep my spirits up. Even my family back at SDSU, it helps me stay grounded.”

While the experience may not have been perfect, Lindley still had the opportunity to throw and work with one of the greatest receivers in the NFL, Larry Fitzgerald.

“I know it’s pre-emptive, but I would say he’s a Hall-of-Famer. He’s been one of the best receivers over the last decade,” Lindley said. “The NFL is a grind; you’ve got to think of it as a marathon, not a sprint. To see a guy like him take care of his business day in and day out has helped me grow as a player.”

The Cardinals did not renew Lindley’s contract at the end of the season, but the defending Super Bowl champion New England Patriots signed him on Aug. 10.

Just like his situation in Arizona, things did not pan out perfectly. He was cut by the Patriots on Sept. 5, a common routine around this time of year when teams are finalizing their rosters.

But this wasn’t the first time Lindley had dealt with getting cut, so he is able to look at the situation in the big picture.

“I consider myself very lucky in the grand scheme of things. If things don’t work out in one place you just have to be ready for your next opportunity,” he said. “We’re a part of a select group (in the NFL), not many guys get to do what we do. Obviously it hurts when that sort of thing happens, but it definitely keeps you humbled.”

No matter where Lindley ends up, it’s a guarantee that whenever he plays against another former Aztec, they will reconnect just like old times.

“It’s a real tight bond that we’ve developed between (Aztec alumni), no matter what the age group is really,” he said. “If you see an SDSU guy in the scouting report, you know you’re going to catch up after the game and see how things are going.”

Lindley and his wife made their home base in Phoenix after he was drafted by the Cardinals and spent several years with them, but he hopes to come back to Southern California some day.

For now, though, the SDSU all-time leader in completions, passing yards, passing touchdowns and victories will be waiting by the phone, hoping he is able to fill the “next man up” role once again.