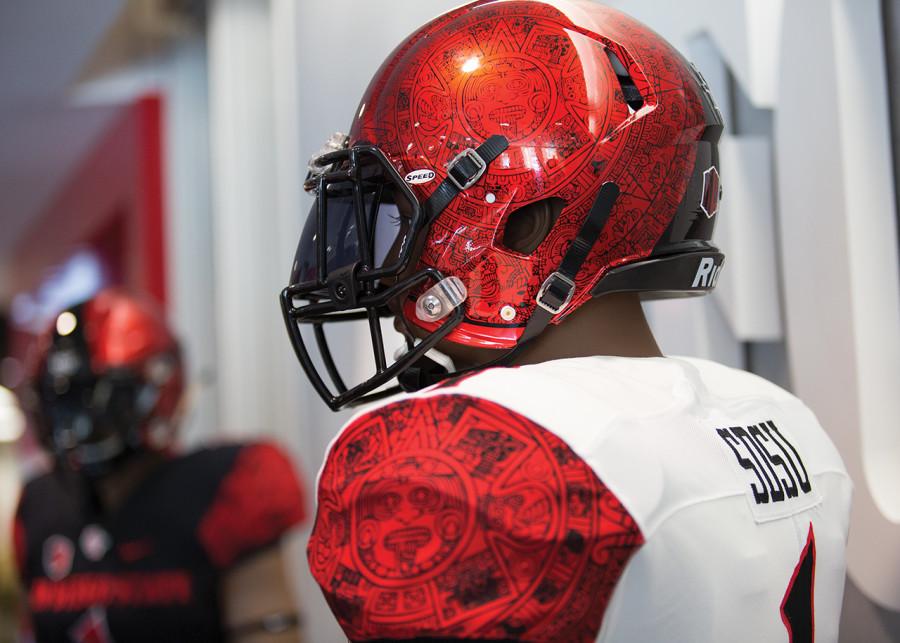 In the past, the word Aztec has been associated with the great ancient warriors of Mesoamerica and with the students of San Diego State.

Now, thanks to the work of assistant director of athletic equipment services and SDSU alumnus Sonny Sanfilippo, an Aztec will be recognized anywhere by the new uniform donned by the SDSU football team in 2015.

“I wanted something that displays who we are,” Sanfilippo said. “And we can go somewhere and people will recognize us.”

The much-availed new look connects the team back to its glory days and to the mighty Aztec warriors that have played at SDSU.

While the jersey has been in the making for two years, the idea for the uniform has existed for much longer.

“When I was a student and I would walk past the Piedra del Sol apartments, they had an actual stone of the Aztec Calendar in front of the building,” Sanfilippo said. “I’ve always wanted to incorporate that into the design.”

The new uniform, which officially debuted in the Aztecs’ 37-3 home victory against University of San Diego on Sept. 5, features the Aztec calendar.

It’s imprinted on the helmet, as well as on the right and left sleeve and on stripes down both sides of the pants.

The team will sport the new design on the home black jerseys and the glimmering white away jerseys on the road.

The helmet especially has drawn vast media attention from the likes of NFL.com, ESPN and Sports Illustrated, putting SDSU football in the national spotlight .

Sanfilippo worked hard to create a jersey that would incorporate ancient Aztec history.

It was a two-year process, in which he worked with Nike to create a manifestation of his vision.

First, he had to check with the people at Nike to make certain that he could customize the jersey.

Then once he got confirmation, he worked to find a way to incorporate the font he wanted.

Sanfilippo made his design and gave it to Nike to develop a sketch and first draft of the uniform. Luckily, he had a concrete vision of how the uniform would turn out.

So when he got the design back from Nike, Sanfilippo quickly tweaked the necessary things, including the placement of the trademark Nike swoosh and the incorporation of the Mountain West logo.

The next step, which was the most nerve-racking, was running it by the coaching staff.

They couldn’t have been more pleased.

“I originally only wanted to do it for a one-game spinoff, but (head) coach (Rocky) Long liked it so much that we decided to go full-time,” Sanfilippo said.

When SDSU put the jersey out to the public, it was received with praise.

It all worked so well because Sanfilippo, from the very beginning, knew exactly what he wanted the jerseys to be.

“I think that (especially) college football should be about tradition,” he said. “We set our footprint on something that works and really shows off who we are.”

The new uniform gives SDSU football and its fans a symbol for Aztec football past, present and future.