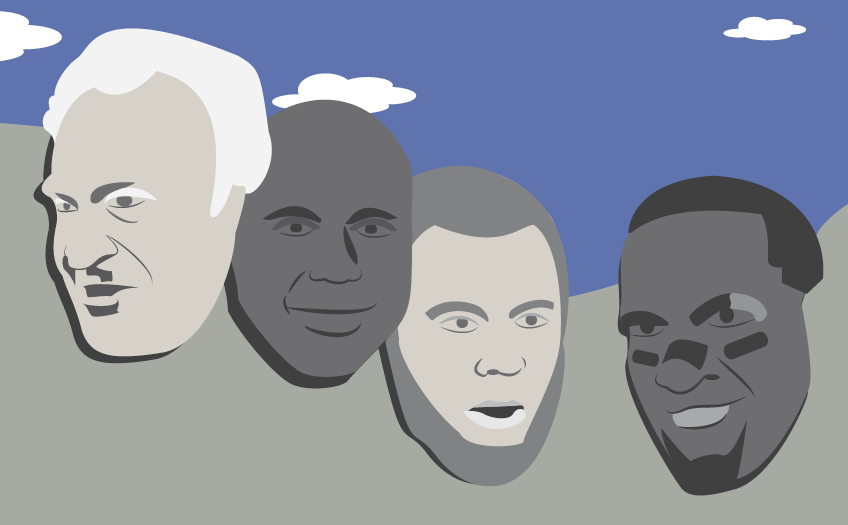 by Patrick Carr and Kris Keehl

Marshall Faulk was recruited out of Carver High School in New Orleans. Although Faulk was an All-American defensive back in high school, the San Diego State football coaches offered him a scholarship to be the Aztecs’ running back.

Faulk started his freshman season as the backup running back, but during the first quarter of his second collegiate game, he replaced the starting running back who left the game, against University of the Pacific, with an injury. Over the final three quarters, Faulk exploded for 386 yards on 37 carries while scoring seven touchdowns.

Faulk played for the Aztecs from 1991-93, and in each season he was a first-team All-American, the only Aztec to be given that honor more than once.

During his career, Faulk ran for 4,589 yards on 766 carries with an average of almost six yards per carry. In addition, Faulk has scored more career points than any player in program history, holds the single-season school record for most all-purpose yards and is the only Aztec to rush for 300 yards or more in a game, which he did twice.

Following his junior season, Faulk declared for the NFL Draft and was the number two overall pick by the Indianapolis Colts.

Faulk played a combined 12 years for the Indianapolis Colts and St. Louis Rams. Over the course of his NFL career Faulk garnered first-team All-Pro honors three times, was selected to seven Pro Bowls, played in two Super Bowls and won one. In 2011 Faulk was inducted into the Pro Football Hall of Fame.

SDSU football has never had an era as great as the one that head coach Don Coryell presided over. Coryell came to SDSU in 1961 after serving as an assistant coach at USC.

From 1961-72 Coryell worked his way to becoming the winningest coach in SDSU history. His career record is 104-19-2, including three bowl game victories, over 12 years.

In addition, he led his teams to winning streaks of 31 and 25 games. Coryell’s teams still hold the record for most yards in a single game, at 769 yards, and highest yard-per-game average in a season, at 532.2.

Coryell is famous for what he did in revolutionizing the passing game at both the college and professional levels.

With his new strategy, Coryell coached nine first-team All-Americans (including the time before SDSU was in Division I).

He also had a significant impact on his assistant coaches, who were future Super Bowl winning coaches and Pro Football Hall of Fame inductees John Madden and Joe Gibbs.

Coryell moved on to the NFL where he coached for nine years with the St. Louis Cardinals and the San Diego Chargers.

Variations of the “passing tree” and the play-calling  Coryell used at SDSU and in the NFL are still being used today at all levels.

Coryell was inducted into the College Football Hall of Fame in 1999.

He was the first coach in football history to win 100 games over a career coaching college and NFL teams.

Lindley was a quarterback recruited out of El Capitan High School in Lakeside, California. He spent his first season at San Diego State as a redshirt freshman learning from future NFL quarterback Kevin O’Connell. But as soon as Lindley got a chance, he showed he belonged.

Lindley would go on to become a four-year starter from 2008-11, during which he started 44 consecutive games and totaled 49 career starts, both SDSU records. He also set school records by completing 961 passes and throwing for 90 touchdowns in his career.

Lindley set the school record for career passing yards with 12,690 and set another record by being the only quarterback to throw for 3,000 yards in three straight seasons.

Perhaps his greatest contribution is something that Aztec fans still enjoy. Lindley led the Aztecs to the 2010 Poinsettia Bowl when they beat the Naval Academy, the first bowl game in 11 years.

In 2011, he led SDSU to the New Orleans Bowl, which put the Aztecs in back-to-back bowl games for the first time in 43 years. Lindley ushered in what could be called the “Bowl Era” of SDSU football, as the Aztecs have now made five consecutive bowl game appearances.

Lindley was drafted by the Arizona Cardinals in the sixth round of the 2012 NFL draft.

He has spent parts of three seasons with the Cardinals and time on the San Diego Chargers practice squad. He most recently spent time with the New England Patriots this offseason.

As with any top football players of a certain era, offense always gets the fame. It’s a theme in college football, too, since the Heisman Trophy, supposed to be awarded to college football’s “best player,” hasn’t had a defensive winner since Michigan’s Charles Woodson in 1997.

Former SDSU linebacker Morrison won numerous awards, scared a lot of quarterbacks and running backs and was one of the most influential defensive players in his four years at SDSU.

He was a two-time All-American at, one of 13 in the school’s history. He was also a two-time Mountain West Defensive Player of the Year and led the Aztecs in tackles in 2002 and 2004.

Morrison is second all-time in tackles at SDSU. He was also called the most “complete” linebacker in the West in 2003 by ESPN.

The ferocious tackler also tied for the team lead in interceptions in 2002 and returned one for a game-winning touchdown against University of Wyoming.

As always, the statistics never tell the full story. Morrison was the most impactful defensive player since Willie Buchannon, who was an All-American in his short time at SDSU.

In 2005, his hometown team, the Oakland Raiders, took him in the third round of the NFL Draft.

Morrison retired from the league in 2012 and is following a career path similar to many NFL vets: TV broadcasting. He’s currently an analyst for SDSU football’s radio broadcasts.

He was inducted into the Aztec Hall of Fame in 2014.

Back in August, The Daily Aztec’s assistant sports editor Ryan Posner came up with the idea to do a Mt. Rushmore style graphic for the two-page spread in this football special issue.

So we set about looking through the archives of San Diego State football, of which there are a lot.

And there are a lot of famous alumni.

Not many people in this day and age have heard of Dennis Shaw,  Haven Moses, Willie Buchannon or George Brown.

They’re all San Diego State football legends in their own way.

He was named team MVP in 1969 when the Aztecs went undefeated and won the Pasadena Bowl, played at the Rose Bowl Stadium, over Boston University, 28-7.

Perhaps the most amazing part of Shaw’s history was that 1969 season. 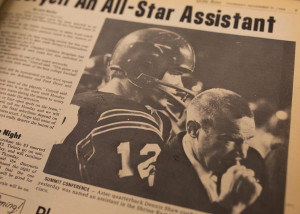 On Nov. 15, 1969 during a home game against New Mexico State, Shaw threw nine touchdown passes in that game, including an NCAA record seven in the first half, en route to a 70-21 win over NMSU.

He finished 1969 as the NCAA passing champion.

One can only imagine the kind of numbers SDSU might’ve put up if Shaw had Haven Moses to throw to.

Moses was an All-American in 1967, an Aztec Hall of Fame inductee and a first-round draft pick of the Buffalo Bills in 1968.

Buchannon played defensive back form 1970-71 and led the team in interceptions both years.

Like Moses, Buchannon was an All-American, winning his award in 1971 before being drafted No. 7 overall in the 1972 NFL Draft by the Green Bay Packers.

But Brown’s history is one many San Diegans can relate to: the military. Not many World War II veterans are around any more. The Nazis surrendered just more than 70 years ago and the Japanese did the same almost exactly 70 years ago.

It was kids out of high school, kids hearing about the Pearl Harbor attack and then signing up for the military the very next day.

Brown was a guard and a linebacker in his football career, which started at the Naval Academy from 1942-43 before he fought in WW II.

In 1947, he returned to his native San Diego to play for the Aztecs and was voted team MVP that year.

He also came from the era when SDSU played football games in the Aztec Bowl Stadium, where fans sat on concrete bleachers from 1936-67 before Jack Murphy Stadium opened.

Every one of these players made history in their own right at San Diego State.