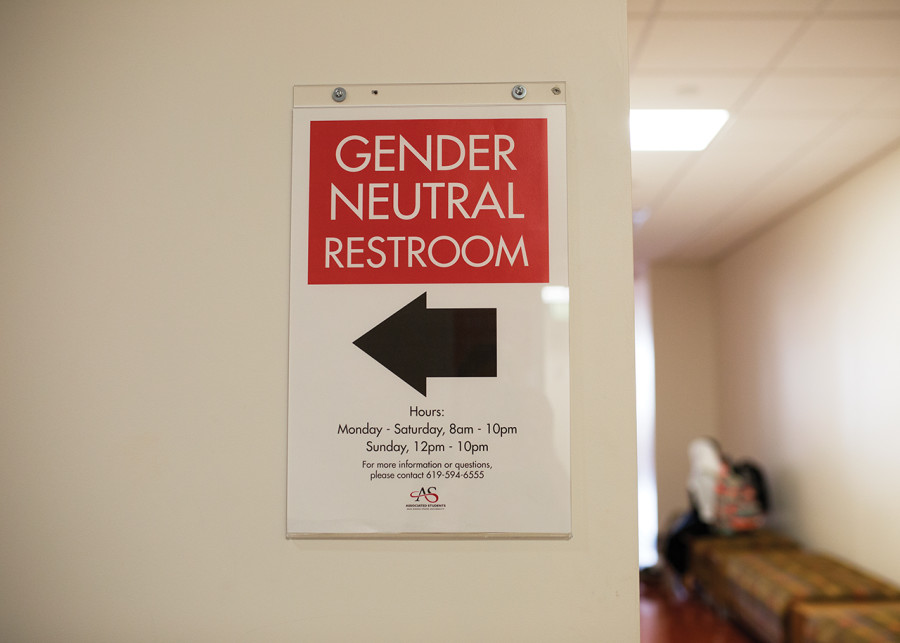 The sign reads, “In keeping with San Diego State University’s policy of non-discrimination on the basis of gender identity and gender expression, Aztec Recreation supports and values an individual’s right to access and utilize recreation facilities, restrooms, locker rooms, programs and services in accordance with an individual’s gender identity and gender expression.”

The new signage refers to multiple on-campus gender-neutral bathrooms and other facilities SDSU has designated as safe spaces for transgender students.

Last semester, ARC staff escorted transgender student A.T. Furuya out of the ARC’s male locker room after another gym member harassed him. Alison Pennington, the pro bono attorney representing Furuya, said she believes the university has made great improvements in protecting transgender students since the incident.

“I think the ARC, Associated Students and SDSU have taken significant steps to ensure the safety of transgender students,” Pennington said.

Pennington went on to add that the amount of protection provided for transgender gym members relies mainly on the education of patrons and the training of ARC staff members.

“The ARC has had a really good non-discrimination policy on the books for a long time,” Pennington said. “But the policies are only effective as long as the members who use the facility and the staff that run the facility know about the them.”

One hundred and fifty-four people responded to an anonymous online poll issued by The Daily Aztec over the weekend that asked, “What do you think about gender-neutral restrooms on campus?”

More than half of respondents said there should be an equal number of gender-neutral, men’s and women’s restrooms.

Less than four percent of poll users responded in the “other” category and said there should be just a few restrooms on campus that are not gender specific.

A.S. Vice President of External Relations and Chief Communications Officer Tyler Aguilar said the campus has had gender-neutral bathrooms since 2013 and more of them are planned.

Aguilar also said that the student body’s general reaction to gender-neutral bathrooms has been positive so far.

However, Thomas Negron Jr., member of the Trans*Action and Advocacy Student Coalition, said that the gender-neutral bathrooms are not as accessible as gender-specific bathrooms on campus.