SDSU football has itself a little quarterback controversy 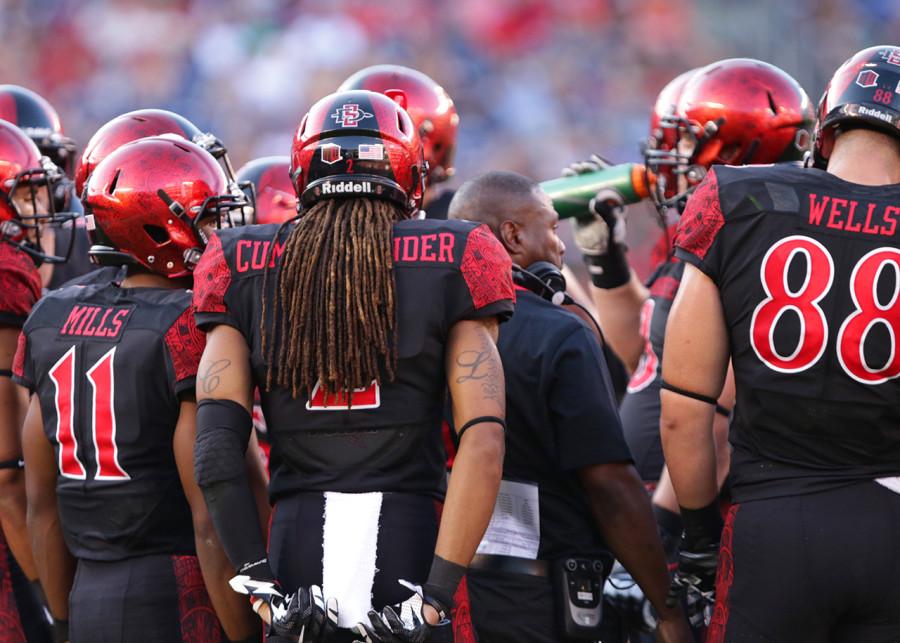 A couple Saturdays ago against University of San Diego, San Diego State football had a defense to carry and save itself in a 37-3 win.

Last Saturday’s game against UC Berkeley showed what can and will happen when a savior doesn’t show up.

For the second week in a row, the offense couldn’t get it done.

As a result, there is a definite quarterback controversy in head coach Rocky Long’s quarter.

Even in the face of this controversy, however, it wouldn’t be wise for Long to make a switch at quarterback.

Senior quarterback Maxwell Smith got off to a good start against Cal, leading his Aztecs to a touchdown on the first drive of the game, which was capped off by a 29-yard touchdown pass to junior tight end Daniel Brunskill.

After that, though, the offense found troubles each and every way it turned.

It was not just Smith who struggled at quarterback. Redshirt-freshman Christian Chapman also found life difficult after being inserted first for a drive in the second quarter, and later once the game was no longer in question.

Having to play opposite arguably the best quarterback in the nation, junior Jared Goff and his high-powered “Goffense,” only highlighted the lack of a dignified signal caller for the Aztecs.

After the USD game, Smith said to reporters that he “had to get better,” and promised that the offense “was going to be better” in the coming weeks.

If we are basing the merits of the Aztec starting quarterback off of whether he keeps promises, then Smith would be sent to the bench.

That’s not how Long will decide his starter, however easy that would make things.

Smith has many upsides. He’s a well-built quarterback, standing at 6-foot-5. He also played — pretty well sometimes — in arguably the best conference in football, the SEC, while he was at University of Kentucky. So he has experience on his side.

Sadly, it has not shown in the first two games.

Chapman will be the starting quarterback of the future for SDSU, that is almost certain.

The redshirt freshman narrowly lost the starting job to Smith this offseason and shows a lot of promise and athleticism.

He will lead the Aztecs heading into the future — but not now.

The Aztecs have a great opportunity this year to break through the plane of mediocrity that it’s existed on for the last several years.

The defense is veteran-led and talented at every level, and the running game headlined by junior running back Donnel Pumphrey is no question the top in the Mountain West.

Even though Smith has struggled this season, this is simply a result of his reintroduction to college football. Remember, up until the season opener against USD, he had not played a single snap since 2013, his sophomore year at Kentucky, during which he suffered an ankle injury that required season-ending surgery.

He will get better, especially once Pumphrey and company can find themselves in the backfield again.

SDSU’s offense is centered around the record-breaking 5-foot-9 fireball wearing No. 19.

Even disregarding all outside variables, Smith showed much better than Chapman by pure stats on Saturday.

Chapman was 4-13 with 37 yards and an interception, with much of his play during garbage time in the fourth quarter.

At the very least Smith led the Aztecs on a touchdown drive.

We’ll see if that’s enough to convince Rocky Long when SDSU faces off against University of South Alabama next Saturday in front of the home crowd, however small it may be.