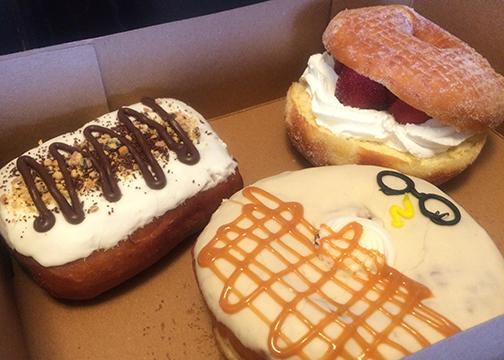 Just a block west of the San Diego Symphony in downtown sits a small shop that similarly attracts lines of people waiting to witness an exciting production — the production of gourmet donuts, that is.

The Donut Bar, tagged on Instagram as having the #BestDonutsInTheWorld, grew from opening in 2013 with a staff of people that could be counted on one hand to being praised by famous publications and celebrities, such as USA Today, Steve Harvey and Ellen DeGeneres.

The Donut Bar opens at 7 a.m. on weekdays and 8 a.m. on weekends. It remains open until it sells out, which can be expected by the late morning or early afternoon. The restaurant’s menu changes daily and includes vegan options.

The weekend crowd is impressive as eager customers craving their donut fix line up before the store opens its doors. One Sunday morning, owner Santiago Campo greeted waiting guests by surprising children with free balloons and “Sesame Street” Cookie Monster donuts. He addressed the rest of the line by expressing his gratitude for the turnout and his feelings of relief regarding not making 3,850 donuts the night before in vain.

Campo was particularly proud of the French toast donut, a made-to-order item which, upon viewing, appears to literally be a slice of French toast with a hole in the middle.

”It’s a recipe that I learned to make at the Four Seasons on Maui. We had the custard in Maui, but we didn’t have my donuts,” Campo said. “I use Madagascar vanilla bean paste in it, (and) I use a little bit of Malibu rum. You can’t really taste it too much, but it brings out that coconut-y flavor.”

The shop features a number of other eye-catching donuts, as well. One is the enormous Homer’s donut, a pastry identical to the donut the character is seen eating on “The Simpsons,” even down to its rather cartoon-like size. Another is the Nutella burger, which is designed with yellow, red and green frosting imitating condiments peeking out from the middle as if it was a real burger.

One popular vegan option is the Strawberry Split. A large donut covered in granulated sugar encompasses a bed of whipped-cream-laden strawberries.

Psychology and Spanish junior Scarlett Castro had mixed feelings about the donut.

“The strawberries were super fresh,” Castro said. “I wasn’t a fan of the cream. It was really fluffy, but I expected it to be sweeter.”

For a more basic approach to the donut, the caramel latte and butter beer donuts are light and fluffy donuts focused more on the flavor of the frosting.

The caramel latte donut lives up to its name. While the donut is pleasantly mild, patrons that come at it from the wrong angle may experience an extraordinary amount of sticky caramel on the roof of their mouths, resembling the inside of a Starbucks drink with caramel walls.

The butter beer donut consists of a butterscotch-glazed bun with a latticed design and a small insignia of eyeglasses and a lightning-bolt scar any “Harry Potter” fan would recognize. This donut tastes how dining in Hogwarts castle’s Great Hall must feel.

Some of the more hearty donuts are the Big Poppa-Tart and Oh My Birthday Cake Oreo donuts. While they are bulky in size, their contents make them almost too sweet to eat.

The Oh My Birthday Cake Oreo donut is significantly smaller and decorated with rainbow sprinkles, crumbled Oreo cookie and an actual birthday-cake-flavored Oreo inside.

A total of six donuts and one order of strawberry milk was $23. For anyone who is looking to satisfy a sweet tooth and go about the rest of their day smelling sickly sweet, The Donut Bar is the place to go.