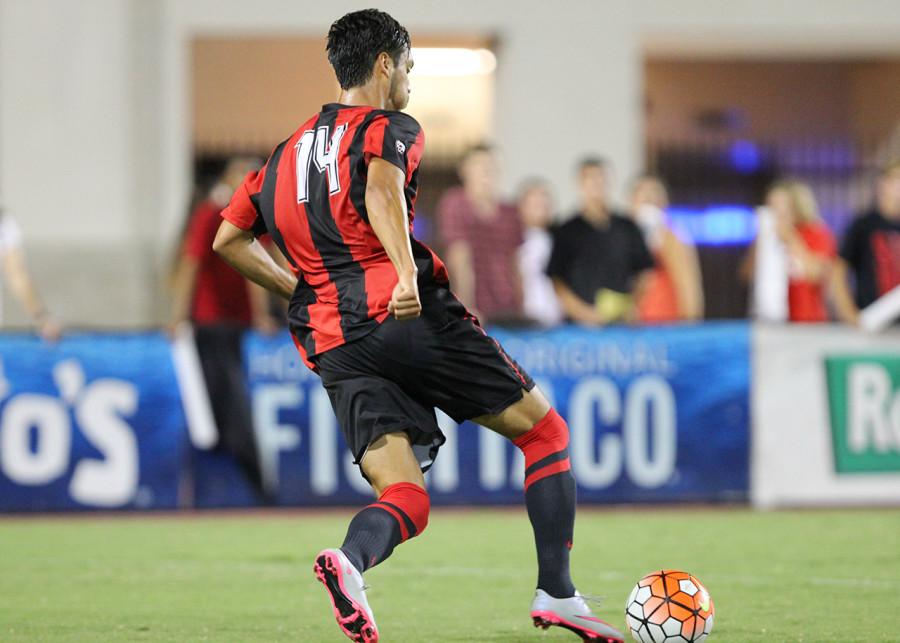 After its first weekend in program history with two 0-0 ties, the San Diego State men’s soccer team found the goals it was looking for in a 3-1 win over the University of Texas, Rio Grande Valley Vaqueros on Friday.

With the win at the SDSU Sports Deck, the Aztecs remained unbeaten in 2015 and improved their overall record to 4-0-2, their best start since 2005 when the team went 7-1-1 through the first nine games.

“Super win and probably the best one of the year when you put it all together,” head coach Lev Kirshner said.

SDSU came into the match with only two goals conceded on the season, but gave up an early goal from UTRGV’s first and only shot on goal

In the 25th minute, the Vaqueros passed the ball around top of the penalty box until freshman midfielder Miko Pusskari unleashed a shot that went straight into the top left corner out of the reach of SDSU sophomore goalkeeper Adam Allmaras for a 1-0 lead.

The Aztecs responded quickly and generated two quick scoring chances. In the 31st minute sophomore forward Jeroen Meefout drew a foul a yard outside the penalty box, but his free kick sailed high and wide right of the goal.

In the 35th minute UTRGV junior goalkeeper Leo Castillo was given a yellow card for holding on to the ball for too long and the Aztecs were given an indirect free kick at the top of the penalty box. Sophomore midfielder Ozzie Ramos rolled the ball forward, but junior defender Travis Nicklaw’s shot also sailed high and wide of the target.

The Aztecs kept pressing forward and Nicklaw didn’t miss again a few minutes later when he volleyed a cross from senior striker Rene Reyes into the side netting of the goal to even the score 1-1.

Nicklaw said he heard a teammate telling him to trap the ball, but he decided to take the shot instead.

“I didn’t plan on volleying it at first,” he said. “I think it was just instincts right there.”

The goal was Nicklaw’s first of the year and the second assist for Reyes.

Kirshner said having Nicklaw back with the team, after his break to play with Guam national team, adds depth to the team’s defense.

The first half ended tied 1-1 with the Aztecs out-shooting the Vaqueros 8-1.

SDSU kept the pressure on the Vaqueros and broke through in the 65th minute to take the lead 2-1.

Sophomore midfielder Dallin Cutler started the chance with a lobbed through-ball over a Vaqueros’ defender then freshman defender Aleks Berkolds laid the ball off for junior midfielder Casey Macias, who put it in the back of the net.

The Azetcs capped off the scoring for the night in the 85th minute with a headed goal by freshman defender Kyle Adams off of a cross by sophomore midfielder Dallin Cutler.

The Aztecs outshot the Vaqueros 15-4 overall and 6-1 in shots on goal.

“We’re a great unit,” he said. “Everyone’s on the same page and we’re just starting to really gel.”

The Aztecs will look to remain unbeaten on Sunday at 6 p.m. when they face arch-rival UNLV at the SDSU Sports Deck.