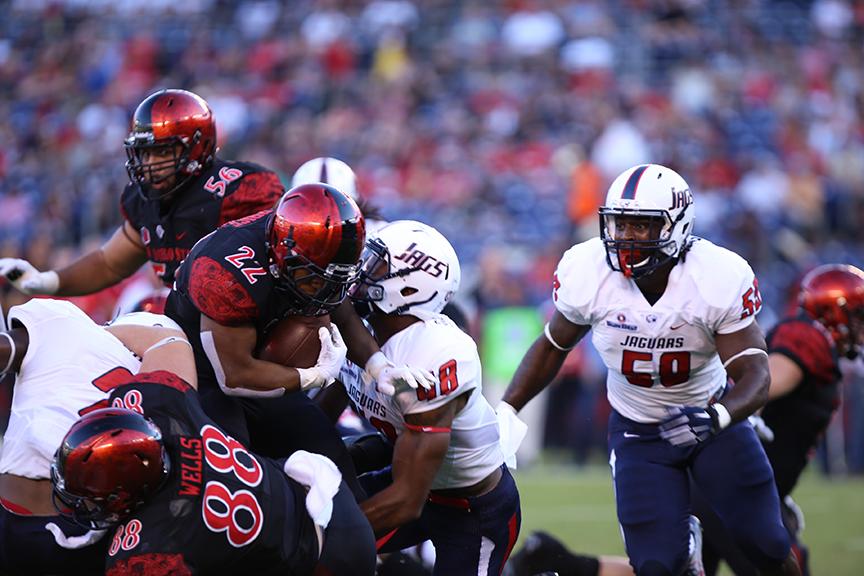 Momentum has no loyalty.

It only takes one play for it to change sides and its fingerprints were all over San Diego State football’s 34-27 overtime loss to the University of South Alabama Saturday night.

“I wanted to win and every single guy in that locker room wanted to win and we didn’t,” SDSU senior quarterback Maxwell Smith said. “(Losing is) an awful feeling and it’s a feeling that we don’t want to have anymore.”

With a 27-24 lead and only two minutes left in the game the Aztecs seemingly had the momentum and the game in the bag, but the Jaguars — and momentum, for that matter — had a different plan.

Then Clements found Everett for a 15-yard pass to the Aztecs 2-yard line in overtime. Jaguars’ sophomore running back Xavier Johnson would finish the drive and give USA a 34-27 lead.

SDSU was not able to respond as it only gained one yard on its overtime possession, ending in an incomplete pass that hit junior tight end Daniel Brunskill on the fingertips in the end zone.

The game was a see-saw battle that saw both teams trade momentum and the lead.

After a first quarter where the Jaguars held the Aztecs to only five minutes of possession and 36 total yards, SDSU’s senior running back Chase Price broke a 35-yard run to begin the second quarter.

The Aztecs would go on to dominate the second quarter due to excellent field position set up by superb special teams play. Junior punter Tanner Blain would channel his inner Ray Guy and boot 60- and 41-yard punts and forced the Jaguars to start at their own 2- and 6-yard line, respectively.

On the other end junior wide receiver Lloyd Mills had two punt returns for 98 yards that would set up both Aztec touchdown drives in the quarter. He finished with 106 punt return yards.

“I thought that actually changed things into our favor in the second quarter,” Long said about Mills’s punt returns.

Mills would actually throw the first touchdown pass of the game as he heaved up a pass to Smith from seven yards out while being tackled on a reverse play.

“When I came around I saw (the defensive end) and he got me,” Mills said. “Luckily, I turned and am left-handed. He grabbed my right arm, so I switched to my left and I threw it and Maxwell was open.”

SDSU appeared to have control of the game with a 17-3 lead just before halftime, but Price would fumble the ball on the Aztecs 46-yard line with 19 seconds left in the second quarter.

That was all Clements would need as he found junior wide receiver Josh Magee down the right sideline for a touchdown.

“The biggest mistake we made was fumbling the ball,” Long said. “They throw up a Hail Mary pass and our (defensive back) falls down and trips and falls flat on his face and it was an easy touchdown.”

The Jaguars scored on their second play from scrimmage to open the second half, as Johnson ran 74 yards to paydirt.

The Aztecs would only manage 18 yards on their next drive and gave it back to an energetic USA squad.

The Jaguars would push the ball down the field with ease on SDSU’s defense, until USA would gamble on a fourth-and-one. Junior safety Malik Smith stuffed the Jaguar run and returned the momentum to the Aztecs.

Five plays later senior kicker Donny Hageman would cap off the drive with a 54-yard field goal, the longest of his career and his second of the night, to give SDSU a 20-17 lead.

USA would not quit and after a Hageman missed a 41-yard field goal, his first miss of the season, and the Jaguars quickly pounced on the Aztecs. Junior tight end Gerald Everett did the brunt of the work and took a 57-yard pass from Clements to a 24-20 lead.

“I kicked (the missed field goal) good,” Hageman said. “I really don’t know what went wrong. I barely missed by a couple inches to the right.”

The Aztecs didn’t crack yet and allowed their thoroughbred to run. On their ensuing eight-play, 61-yard drive, junior running back Donnel Pumphrey touched the ball six times for 47 yards and scored on an 8-yard scamper.

With this loss the Aztecs drop to 1-2 and more importantly 0-2 in bowl eligibility, as the University of San Diego is a non-scholarship program and SDSU’s win over USD doesn’t count because the Toreros don’t offer football scholarships.

The wide receivers finally get involved

It took only about nine and a half quarters, but the Aztecs have finally thrown a touchdown pass to a wide receiver. Sophomore wide receiver Mikah Holder would bring in the first touchdown reception for the much-maligned unit on a 30-yard pass from Smith.

This came only two plays after fellow wide receiver Mills returned a punt 57 yards to the USA 32-yard line.

On the night the wide receivers hauled in four receptions for 58 yards.