SDSU’s special teams was only thing ‘special’ against South Alabama 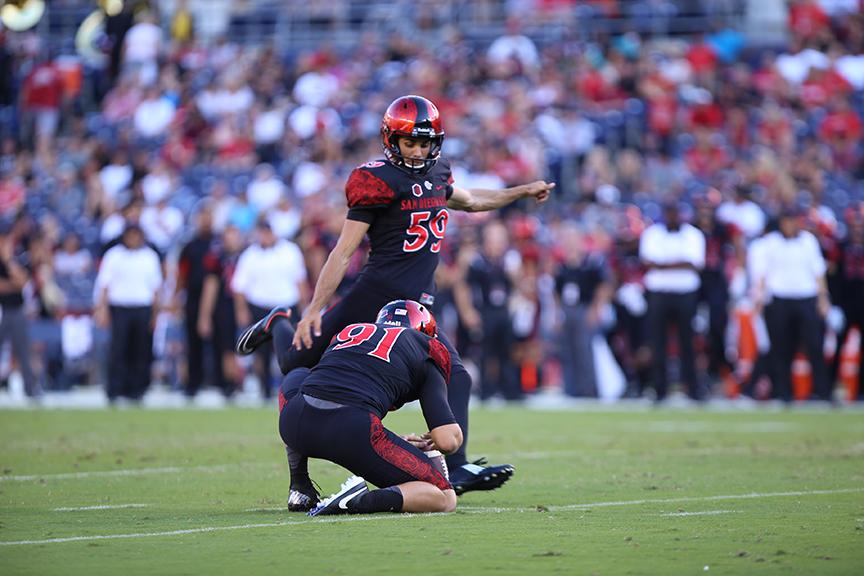 It’s a narrative that has been written time and again, and frankly, is getting too predictable.

In a game that SDSU shouldn’t have lost, played in a stadium that was much less full than it should’ve been, the story was not just how sluggish and inconsistent the offense played.

A silver lining in the Aztecs’ 34-27 home overtime defeat against University of South Alabama was the special teams unit, aptly named based on its performance against the Jaguars.

The unit did what the offense has been unable to in three games in which the Aztecs have floundered through: make big plays.

Even in a bad loss, the impact of the special teams players needs to be appreciated, because that’s all the Aztecs have going well for them going into the contest in Happy Valley next Saturday against Penn State.

In the heartbreaking defeat, the game-saving touchdown catch in the last play of the game literally slipped out of the hands of junior tight end Daniel Brunskill. But special teams kept the Aztecs in the game.

And in a sport that’s all about field position, the Aztecs couldn’t have asked for better.

The average start of each drive was the 40-yard line, and on three occasions the drive started already in South Alabama territory.

A lot of that can be attributed to junior wide receiver Lloyd Mills. Mills made two electrifying punt returns of 41 and 57 yards, energizing the Aztecs and putting the offense in positions to make plays.

Mills even went 1-1 passing, tossing a touchdown to senior quarterback Maxwell Smith for the first red zone passing touchdown of the season, giving the Aztecs a 7-3 lead at one point in the second quarter.

That play was set up by his first return, bringing the offense all the way to the 9-yard line. At that close, not even the SDSU offense could waste the opportunity.

Later in the second quarter, Mills once again lit up the crowd, bringing a punt back 57 yards to the South Alabama 32-yard line.

Two plays later, Smith connected with sophomore wide receiver Mikah Holder for a 30-yard score, the first passing touchdown to a wide receiver this season for the Aztecs.

Two drives, each set up by a big return from Mills.

Kudos to the offense for closing the drives, but none of the scores were possible if not for the heroics from Mills.

Not only was he the lone spark for the Aztecs on Saturday night, but he wasn’t afraid to share his success with his teammates.

“I’ve got to give credit to the other 10 guys on the punt return team,” Mills said when asked about his lengthy returns. “Every time I caught the ball, I had five yards of space between me and the closest defender.”

Up to the time of his first return, the only points that the offense could muster were off the leg of senior kicker Donny Hageman.

Hageman was 2-for-3 on field goals, including a blast from 54 yards, which gave the kicker a new career high and was the second longest in SDSU history.

Even junior punter Tanner Blain made a name for himself, averaging 46.8 yards per punt.

On three different occasions, the South Alabama offense was backed up inside its own 10-yard line, and on average started its drives on the 24-yard line.

The fact that SDSU lost the game, and in the manner that it lost, puts all the media attention on the coaching staff, the struggles of the offense and the inability of the defense to stop second-tier South Alabama.