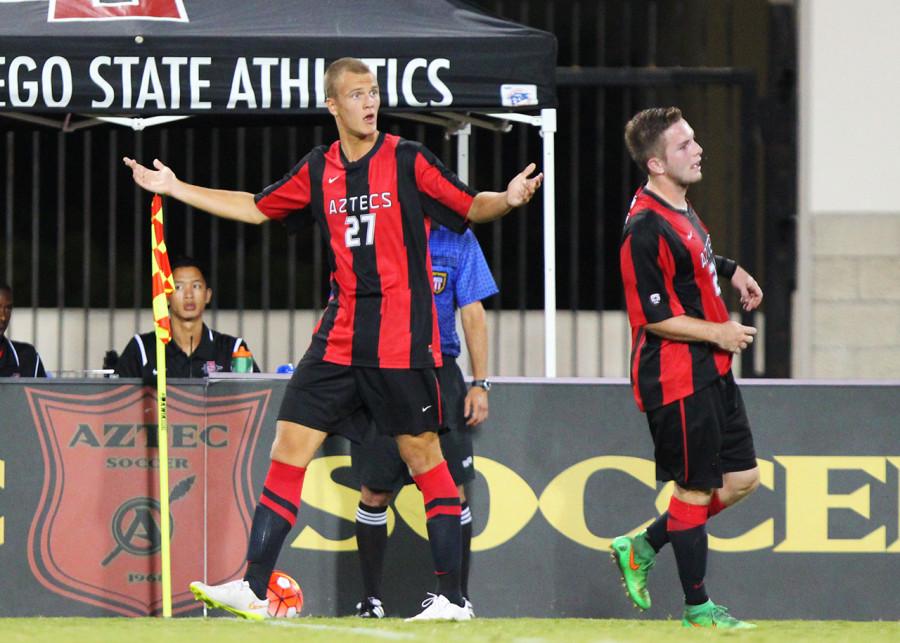 A free kick, corner kick and penalty kick cost the Aztecs their first game of the season in a tough 3-2 loss.

SDSU started off the game dominating offensively with its effective communication and one-touch passes. In the eighth minute, senior defender Casey Phillips’s free kick went past the keeper into the left side of the net, giving the Aztecs an early 1-0 advantage.

The Aztecs’ next chance to score came in the 30th minute when senior forward Rene Reyes shot from the right side past UNLV redshirt-junior goalkeeper Richard Garness. However, the ball hit the left goalpost.

UNLV had two chances to score from corner kicks, but SDSU’s defensive line stayed tight, ending the first half 1-0.

The Rebels entered the second half anxious to score and began attacking offensively early on.

“They took over the game in the beginning of the second half,” Kirshner said. “We made some adjustments and got the game back under control.”

Frustration caught up to the Rebels as their efforts to score led to no result, prompting them to push and shove instead.

In the 58th minute, Aztec freshman defender Aleks Berkolds shot from halfway between midfield and the penalty box past Garness’s head and out of his reach. The ball ricocheted off the crossbar.

UNLV freshman midfielder Tony Murillo received a free kick at the top of the box in the 68th minute and struck the ball into the center of the net, tying the game 1-1.

The Rebels got off the field and onto the track to celebrate their first goal of the game with their fans on the bleachers.

However, their celebration didn’t last long as less than a minute later, sophomore forward Jeroen Meefout secured the SDSU lead again with a thunderous shot from the left side between the half-way line and the box into the goal.

UNLV continued to fight back and in the 76th minute, freshman defender Jordan Chavez shot from the top of the box into the net off a corner kick from senior midfielder Rodrigo Fuentes, tying the game 2-2.

Pressure was felt from both teams in a rush to add another goal to the scoreboard.

In the 87th minute, Musovski and SDSU junior defender Sergio Enriquez began pulling each other’s shirts in a rush to the ball. The Rebels and Aztecs huddled up in a quick attempt to break up the fight as time was running out.

With less than two minutes left in the match, UNLV secured its 3-2 victory from a penalty kick by Musovski.

“It was an excellent game. I think we did a great job to limit their ability to play,” Kirshner said. “I have to say that (penalty call) was a dubious call. At the end of the day, we pried ourselves in not getting those dead balls. We gave up too many.”

SDSU is now 4-1-2 in the season and will begin a road trip against the University of the Pacific on Sept. 27 in an attempt to improve offensively before the start of Pac 12 play.