Alexis Cage looks to pave her own SDSU legacy through volleyball 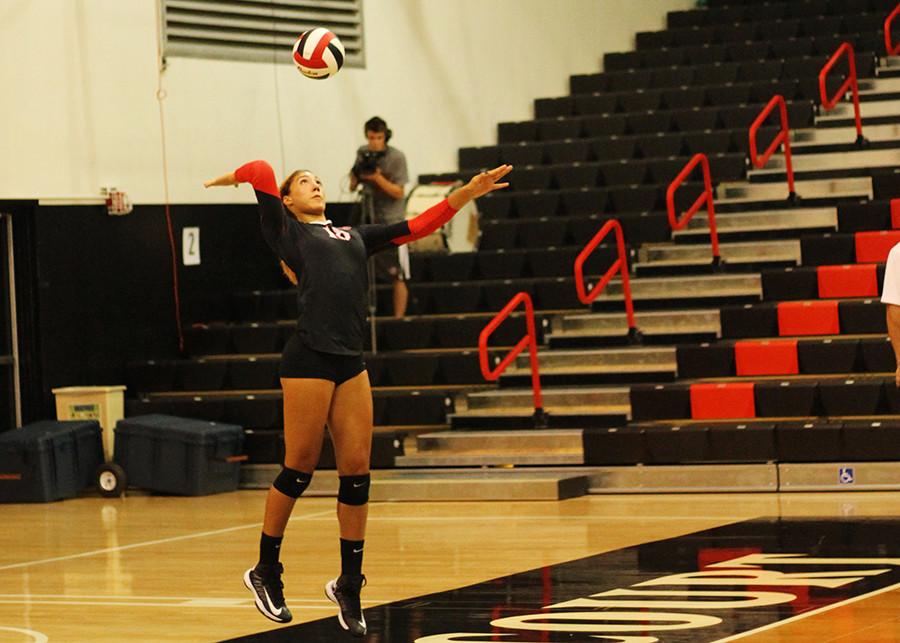 The lights glisten off the waxed surface of the gym floor and footsteps echo as San Diego State volleyball sophomore Alexis Cage takes the court with her teammates to face off against UC Santa Barbara. The net is raised and the game is set.

The Aztecs emerged victorious in this particular match against UCSB last Saturday, in just three sets. Cage, an outside hitter, had 10 kills, six digs and three blocks against the Gauchos.

But there is far more to Cage than numbers, stats and highlights. Her path through life has contributed so much to who she is on and off the court.

Cage has been playing volleyball since she was in eighth grade and it was love at first set. She felt more attracted to volleyball than any other sport due to its cohesiveness and competitiveness. She especially enjoys her current position of outside hitter.

The Cage family already has a legacy at SDSU. Michael Cage, Alexis’s father, had an extremely successful basketball career as an Aztec.

He’s the all-time leading rebounder and second-leading scorer, and he went on to play 15 seasons in the NBA.

Additionally, the men’s basketball team is heavily recruiting her brother, Michael Cage Jr., for the 2016 season.

But now it’s Alexis’ time on her own court.

Cage said her dad played a significant role in molding her into the person and athlete she is today.

“He was always the one I went to for advice,” she said. “He’s always been supportive and has always pushed us. He’s never let us do anything but what’s best for ourselves. I don’t think I could have done it without him, to be honest.”

Growing up with athletics and the competitiveness that filled her house helped Cage develop a mental toughness that allows her to face any challenge thrown her way.

Now another family, the volleyball team, embraces Cage and supports her through everything she does.

“SDSU had the most cohesive and welcoming team when I was looking at schools. Here the girls pull you right in like you’re one of their own,” she said.

In the crazy whirlwind that is college life, she has found a niche that provides comfort and encouragement.

Cage is met by different challenges every day as a student-athlete, but she is always prepared to overcome them with a strong personality that developed in her household.

Now it’s complemented by people with the same mentality and goals as her.

With a rigorous season ahead of her and two families behind her, Alexis Cage can walk out onto the court to build her own Aztec legacy.