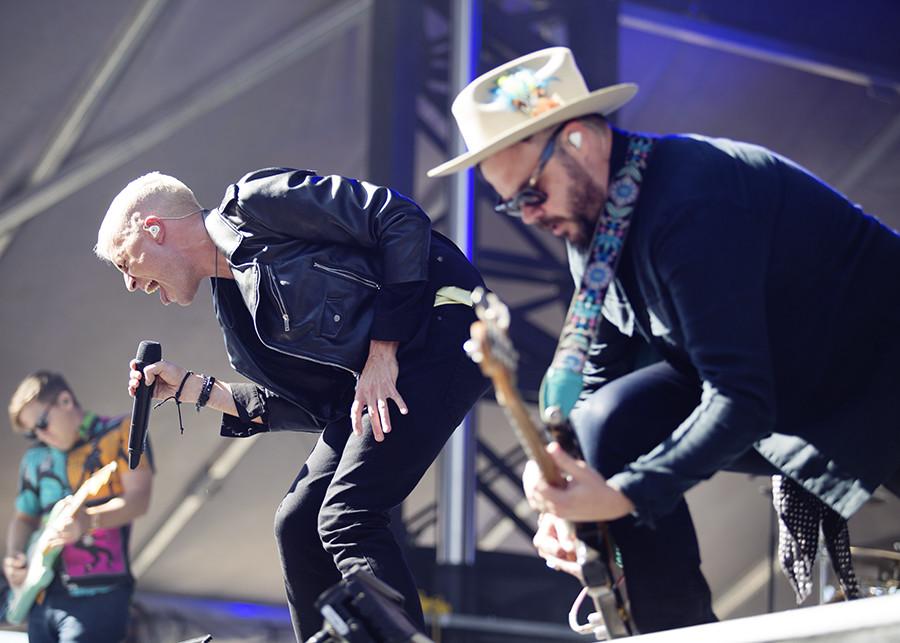 Night fell at the Del Mar Fairgrounds, settling a cool buzz after a day of 90-degree heat. Thousands of people filed into the Sunset Cliffs stage, where the first night of the inaugural KAABOO festival was coming to a climax.

There was a static energy from the crowd. The audience range was diverse — from the 50-year-old, fedora-wearing mom to the 20-year-old college student — but they were all there for the same reason.

Bright lights lit the stage, screams echoed and then there was silence.

“The waves keep on crashing on me for some reason,” a voice slowly sang, belonging to none other than Gwen Stefani.

Cue the roar of excitement from a sea of No Doubt fans.

Stefani bounced around stage with exuberance for the rest of the band’s opening song, “Hella Good.” The frontwoman donned her signature look: baggy cargo pants, embellished belts and a Harajuku Girls-esque top that showed off her abs.

The iconic ‘90s band continued with crowd-pleasing party anthems, such as “Ex-Girlfriend,” “Sunday Morning” and “Bathwater.” The band put new spins on other classics, such as an acoustic rendition of “Simple Kind of Life.”

Stefani repeatedly professed her love to the crowd and pulled a few fans up to the stage for pictures.

“Hurry!” she yelled at a young woman with a Gwen Stefani tattoo. “Get up here before they kick me out of the band!”

“I had wanted to see No Doubt live for years, so there was kind of this big build up,” junior Emilie Jajonie said. “They certainly did not disappoint.”
Young the Giant
An act that rivaled No Doubt for best performance of the weekend was Young the Giant. The soulful rock band has come a long way since its start in 2010 with three chart-topping singles, “My Body,” “Cough Syrup” and “Apartment.”

All in custom, embellished attire, the guys exuded confidence.

Lead singer Sameer Gadhia fueled the audience’s excitement. His sleepy eyes and melodic vocals were mesmerizing against the sounds of his guitar and tambourine. The ever-growing crowd didn’t take away from the intimate atmosphere the band created.

A poignant moment came during “I Got.” Its chorus seemed to howl at the night’s sky, leaving fans heavy with emotion.
Goldfish
Though the headlining acts at KAABOO stopped playing at 10 p.m., the party continued at the indoor Encore stage. The late nightclub hosted a myriad of disc jockeys from 10 p.m. to 2:30 a.m..

One of the standout groups was South African house duo Goldfish. Dominic Peters and David Poole got their start studying jazz in college and surfing the Cape Town coast.

Goldfish has established a name for itself globally, especially in Europe, starting with its 2005 album, “Caught in the Loop.” The two have since been recognized at the MTV Africa Awards and they have released two more albums while crafting their distinctive style of music.

Their DJ sets include live percussion, string, woodwind and brass to create a unique sound.

With 13 years of friendship under their belts, Peters and Poole said they don’t get too nervous before shows because they trust each other completely. Their mutual trust showed through their chemistry on stage.

The crafty duo said they were tired of the credibility of the electronic dance music scene being tarnished by artists who make the process into a popularity contest instead of creating quality music.

“It’s been a culture since the ‘80s,” Poole said. “It should be treated with respect.”

Peters and Poole said they consider themselves more of musical tradesmen as opposed to artists.

The Belly Up Tavern veteran is no stranger to San Diego shores, having surfed and played music along the Southern California coast for over two decades.

The seasoned musician recently released his latest album, “The Heart.”

“All these songs are as close to me singing from the heart as I can,” Frankenreiter said.

He recorded his “experimental album” over a span of two weeks. The entire process was also filmed and streamed live to viewers all over the world on the Internet.

Frankenreiter planned to grab a few beers and waves after his set, and he said that he hopes to play a gig at the Open Air Theater in the near future.
The Killers
The festival featured stellar performances, but for many, it was all about The Killers. Fans poured in from every corner of the venue, coming together for a climactic ending to the weekend.

The familiar opening riff of “Mr. Brightside” came out of nowhere. An army of fans then turned the fairgrounds into the largest karaoke session ever, belting the words of the powerful chorus.

Frontman Brandon Flowers didn’t have much time to chat; he got straight to the hits. The band brought out timeless teenage anthems, such as “Smile Like You Mean It” and “Somebody Told Me.”

“It was so nostalgic for me, and I’m sure for a lot of others,” junior Nicole Piquette said. “I couldn’t help but shed a few tears during their amazing set.”

The band, known to throw in a few covers in its sets, paid tribute to Creedence Clearwater Revival with a rendition of “Bad Moon Rising,” a fitting song to play under the crisp night sky.

An emotional highlight of the set was the love ballad “A Dustland Fairytale,” written about Flowers’ parents.

Without surprise, the band had the entire crowd chanting the gospel-infused lyrics, “I got soul, but I’m not a soldier” of “All These Things That I’ve Done.”

The night ended meaningfully with “While You Were Young.” Fans lingered around the crowd long after the last melodic lyrics left Flowers’ lips.