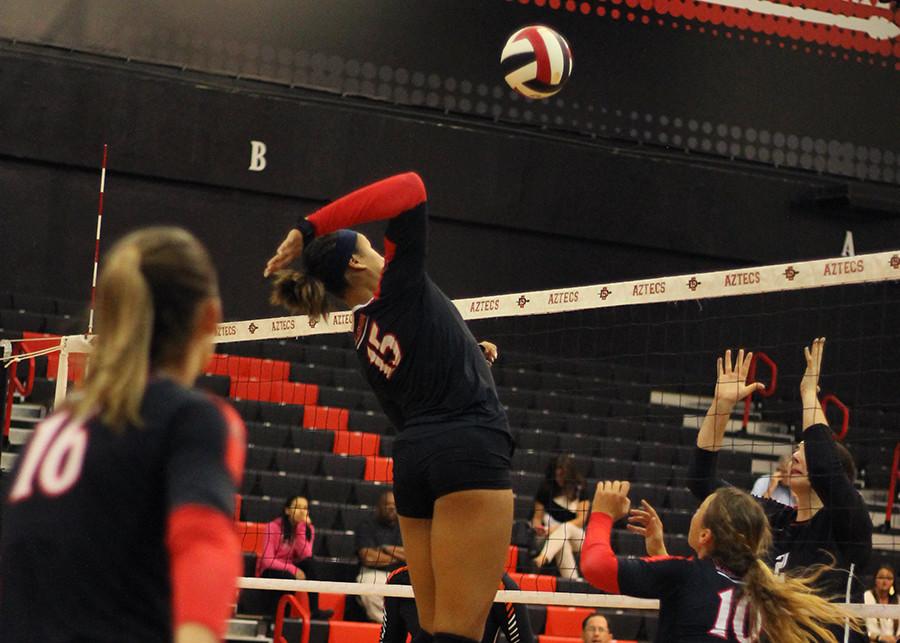 As the San Diego State women’s volleyball team gets ready to begin Mountain West play, it faces a modest prediction to finish sixth in the conference as voted on by the conference’s 11 head coaches.

Colorado State was picked to win the MW, with 97 points in the poll, and is ranked 12th in the country coming off a 31-3 campaign last year. The Rams are followed by UNLV and Boise State, who tied for second with 83 points.

CSU senior hitter Adrianna Culbert was named the 2015 MW Preseason Player of the Year and is a member of the seven-person All-MW preseason team, joined by senior teammate Jaime Colaizzi.

Meanwhile, the Aztecs are seeking their first conference championship since 2012 when they went 23-8 overall and 13-3 in conference.

Nonconference wins haven’t come easy so far for the Aztecs this season. They currently sit in last place in the conference at 3-9, with wins coming against Cal State Bakersfield, Eastern Washington University and UC Santa Barbara.

The tough start doesn’t mean a run at the conference title isn’t possible.

“Everybody is capable,” head coach Deitre Collins-Parker said. “Our conference is very balanced and I expect to play in a lot of competitive matches.”

CSU has played as well as expected (7-3), but the surprise team so far this season has been Wyoming, which owns a 10-2 nonconference record, including an impressive win against ranked Ohio State.

The Aztecs know these teams will pose a potent threat once conference play begins, but can draw on past experience as they split the season series against Wyoming last year, each team winning at home.

A positive sign for SDSU is its past success at Aztec Court in Peterson Gym. In their previous four seasons, the Aztecs are 46-8 at home. Home games will be especially important as many of the MW road venues are hostile environments.

Getting road wins is one of Collins-Parker’s focuses for the year.

“We are comfortable at home and we have to find that comfort away from home,” she said. “We need to improve our record in away games and I believe we will do so this year.”

If the Aztecs want to have success come conference play, they must improve in two key areas: errors and attack percentage.

The key to fixing these weak spots, Collins-Parker said, is playing with more control and confidence.

“Sometimes when we lose the first game in a set, we also lose our edge,” she said. “Getting past that game-one hurdle is a key for us to improve our record.”

SDSU will get its chance to turn the season around against the MW when conference play begins Wednesday in Albuquerque against New Mexico and continues on Saturday in Colorado Springs against the Air Force Academy.

The Aztecs will play their conference home opener Oct. 1 against Wyoming, their first home game in nearly a month.