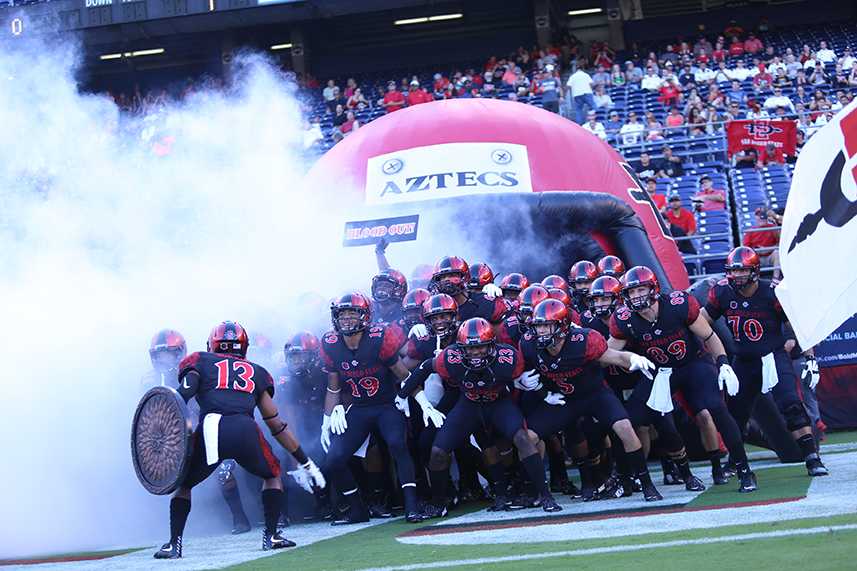 Play along as Daily Aztec senior staff columnist Kris Keehl picks how Mountain West football teams will perform against the spread. Over the course of the season we will keep track of how he performs. Last week he went 3-5-1.

This week’s odds were set at 5:30 p.m. on Thursday, Sept. 24, and come from vegasinsider.com. This is not gambling advice, nor meant to encourage gambling. Picks in bold.

Boise State at University of Virginia (+2.5)

Boise State could be in trouble. Broncos redshirt-sophomore quarterback Ryan Finley will miss eight weeks with a broken ankle, and the Broncos can’t seem to find a solution at right tackle. Pair the right tackle woes with a quarterback who has never started in a hostile environment, and we have an upset alert. Boise State is 0-2 against the spread this year.

Nevada is a bit of an enigma. The Wolfpack beat an FCS opponent, although not in a very convincing fashion, then had their doors blown off in a game that was expected to be close, and then they played better than most expected in a game they should have been slaughtered in. About the only thing anyone can count on out of the Wolfpack is the defense giving up at least 500 yards, borderline-to-above average quarterback play, and head coach Brian Polian going nuclear on the sideline.

What’s going to happen in this one? Who knows? It’s a true pick ‘em with Buffalo being favored by a point. But how could I pick Nevada when it plays in a conference that is 2-21 against nonconference FBS opponents?

A program trying to build tradition against a program of tradition. Unfortunately, both programs are not where they want to be. Both starting quarterbacks are ranked in the bottom five in completion percentage and bottom 20 in yards per attempt among all FBS football quarterbacks. Both offensive lines haven’t played well, but the glimmer of hope for SDSU is that Penn State’s offensive line has surrendered 10 sacks in three games.

What does all this mean? The only chance that SDSU win is if the Aztecs hold Penn State to 21 points or fewer. Prediction alert: SDSU scores a defensive touchdown to cover the spread, but still loses the game.

These are my two favorite teams, for completely selfish reasons, because they both covered the spread last week. Fun fact: Coming into this game New Mexico and Wyoming are ranked No. 4 and No. 5, respectively, in CBS Sports’ worst 25 college football team rankings. Wyoming has lost two straight home games it was favored in. I can’t find any reason to pick the Cowboys to beat the Lobos or cover the spread. This week I’m a Lobo fan.

Last week Colorado State junior wide receiver Rashard Higgins showed he was back and the ankle injury wasn’t a big deal. Also, Rams redshirt-sophomore quarterback Nick Stevens managed to not get pulled for a second straight week. The good news is the aerial scoring tandem is in full effect for CSU. The better news for the Rams: UT San Antonio gives up 16.6 yards per completion. Let’s stop worrying about the spread and start worrying about Higgins going off for 200 yards receiving.

The Warriors picked up a solid win against the University of Colorado in week one, got blown out at Ohio State in week two and beat an FCS school last week. Not much to see here except the quarterback play has been pretty good. Meanwhile, Wisconsin has one loss to University of Alabama and two wins. Wisconsin plays good enough and with consistency to give itself a chance in most games. The Warriors have covered the spread in all games this year. Wisconsin wins the game, Hawaii covers.

A matchup of two 1-2 teams that both have wins over FCS opponents. San Jose State is running a quarterback experiment where two quarterbacks receive almost equal time. Since beating the FCS team, San Jose State’s quarterbacks have been unable to combine for more than 150 yards passing in a game.

But, Fresno State does not want to be outdone at quarterback. Freshman quarterback Virgil Chason, who started last week, is out for the season with a broken clavicle, and his obvious replacement, sophomore Zack Greenlee was arrested for public drunkenness over the weekend.

UNLV at Idaho State (No line)

In the last two weeks, UNLV has lost by 34 and 21 points, respectively. In all three games the Rebels have had the ball run straight down their throats, and haven’t done much on offense to counter that. But, UNLV is facing an Idaho State team that lost to Boise State 52-0 last week. There is no line, but UNLV comes away with a win in this one.

Utah State has a bye this week, but it makes the pick ‘em due to injury news at the quarterback position. Redshirt-senior Chuckie Keeton, touted as one of the best MW quarterbacks during the preseason, will miss the next 4-6 weeks with a sprained MCL, according to Utah State head coach Matt Wells.