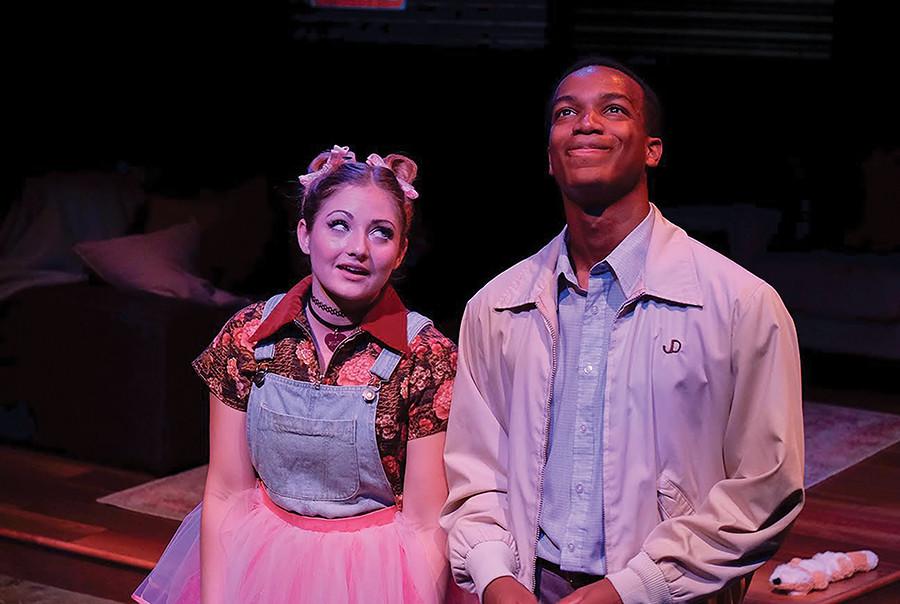 A marriage is derailed when a husband essentially has a love affair with a spunky stray dog he finds in the park in the romantic comedy “Sylvia,” a play by A. R. Kearney that debuted Friday, Sept. 25 at the San Diego State Experimental Theatre.

When Greg brings home Sylvia the dog, his wife Kate refuses to welcome the new pet into their family. Not only has the couple just sent their kids to college and moved from the suburbs to a New York City high-rise, but Greg’s enthusiasm for his corporate job has dwindled.

Instead of sorting out all of his internal and external problems, he starts to focus solely on Sylvia as an escape from facing what is somewhat of a midlife crisis. Much like many pets, Sylvia is blind to Greg’s flaws and worships him like God.

But Sylvia is no ordinary rescue pup. Sure, she has fleas and hasn’t been fully potty trained, but what sets her apart from other dogs is that she walks and talks like a human. She continues to possess canine mannerisms, as well, which were developed by theater junior Kelsey Lynn, the actress who plays Sylvia, and director C.J. Keith.

“We’ve explored all sorts of little doggy movements,” Keith said. “She’ll turn around three times in a spot before she settles on a sofa, and she’s found a wonderful way of working dog toys into the character.”

Despite Sylvia’s endearing and well-meant presence, Kate is uptight yet reasonable in her strong reluctance to accept Sylvia. She doesn’t want Sylvia’s fur on the couch or her pee on the floor, but most of all, she doesn’t want her husband to prioritize his relationship with a dog over his commitment to their marriage.

“Instead of finding himself, he’s found a distraction,” performing arts senior Rebecca Hustedde, who plays Kate, said. “His behavior changes when Sylvia comes along and he starts to let go of his responsibilities and ignore his wife.”

Sylvia is much like the “other woman” in the marriage, something a fellow dog owner actually discusses with Greg. Directionless and searching for something “real,” Greg sees Sylvia as more of a savior than a pet.

Though, she’s a pet that unconventionally verbalizes her thoughts, which forces the audience to suspend their version of reality during moments such as a midnight walk scene where Sylvia goes berserk and drops more than a few hateful “f-bombs” on a feline.

“The cussing that happens in the cat scene is just this string of vituperative venom,” Keith said. “But other than that, it’s a really family-friendly one-act (play).”

The one-act has been quite successful since its premiere in an 1995 off-Broadway production that starred Sarah Jessica Parker as Sylvia. Twenty years later, the play is still relevant to anyone who has depended on their pet for comfort while experiencing uncertainty about their direction in life.

With updated pop culture references to contemporary songs like “Uptown Funk” and mentions of Lena Dunham, the audience will be able to relate to and find humor in the unpredictable way a controversial dog sparks the strengthening of a married couple, who are able to, as Hustedde described it, find love and light amid family chaos.

The play will run its final weekend this Friday and Saturday night at 7:30 p.m. and Sunday at 2 p.m.