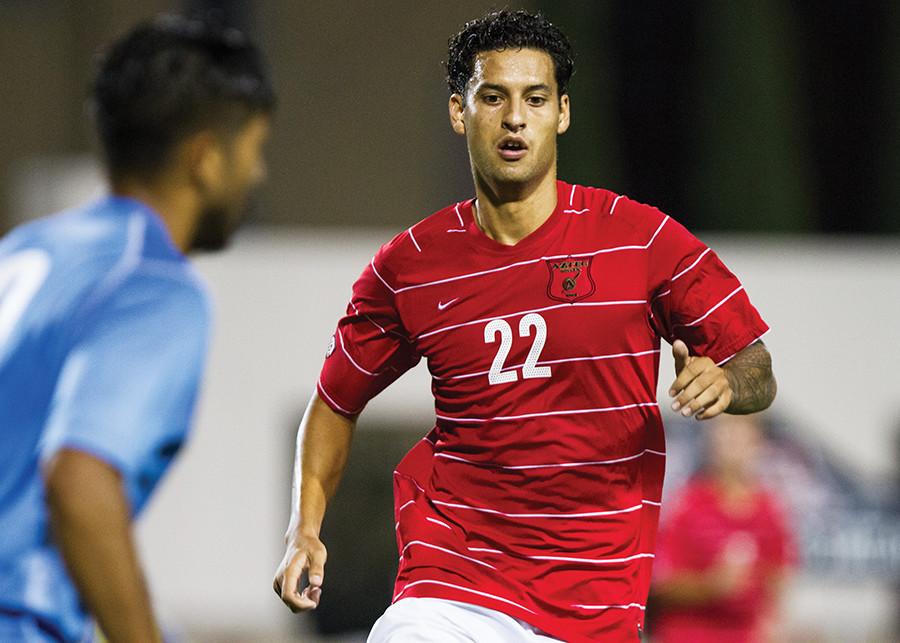 Soccer isn’t like basketball or football where timeouts are allowed so players can talk about the next play or catch their breath.

It’s a game that goes nonstop until the final whistle.

That’s kind of how San Diego State men’s soccer junior defender Travis Nicklaw’s life has been since he joined Guam’s national team, called the “Matao,” in 2012.

He started playing soccer at a young age after his three older brothers did the same.

“(Soccer) was just started in the family,” Nicklaw said.

SDSU head coach Lev Kirshner recruited Nicklaw out of University City High. In 2012, Nicklaw was the lone true freshman to start a game for the Aztecs.

That season he was ranked No. 26 by TopDrawerSoccer in its midseason top-100 freshmen list and was one of five players from the Pac-12 in the top 50.

In November of 2012, Nicklaw confirmed he would be representing Guam at international level.

“Ever since I was little, (playing professionally) was always a big dream,” Nicklaw said. “It was always a goal.”

Guam is a long way from home for Nicklaw. It’s over 6,000 miles away up north in the Pacific Ocean, but it’s also a second home because of his roots.

However, traveling far and often can be difficult when balancing a social and soccer life.

“It’s very difficult having to travel from San Diego State to all the way across the world. I was last in Iran,” Nicklaw said. “It’s basically flying from the middle of the world all the way back. It gets to be a struggle sometimes. It’s just planning ahead.”

Five days later, he scored his first international goal — assisted by his older brother, Shawn ­­— against India in his second match of the World Cup qualifier.

“It was a good feeling helping your country in its first FIFA qualifications, especially because it’s an island. It’s good for it,” Nicklaw said. “It gives soccer a better name.”

That wasn’t the first time Nicklaw scored a “first” goal.

In 2014, he scored his first goal for SDSU against University of Washington.

“At the end of the day, a goal is a goal. But there is a bit of a difference, especially if it’s a qualification goal,” Nicklaw said. “My first goal for Guam was very special.”

Nicklaw scored his first goal this year for SDSU against University of Texas, Rio Grande Valley.

“(Nicklaw) has become much more consistent in his technical play. His ability to connect and receive balls has grown tremendously,” Kirshner said.

“He’s a very powerful player now. He was always 6-foot-2, but he didn’t play like that. Now he’s playing like a 6-foot-2 kid who’s very strong and athletic.”

Nicklaw’s time spent on the field with Guam gives him a taste of professional, international soccer that’s invaluable for him back in the U.S. college game.

“I’ve become more knowledgeable,” he said. “(Playing for Guam) has helped me become a better player, especially when bringing it back to State.”