SDSU offense has chance for a breakout performance against Fresno State 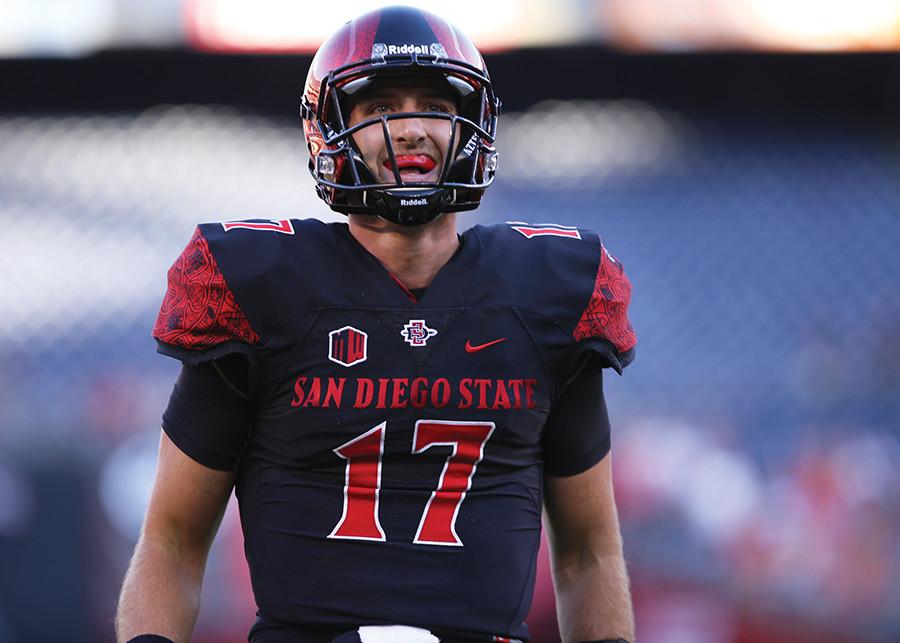 As October approaches, the San Diego State football team looks for a fresh start as they try to put their nonconference schedule in the rear-view mirror and prepare for Mountain West play.

“Well it should be an exciting week, because we got two teams that have been struggling that have a rivalry,” SDSU head coach Rocky Long said Tuesday. “I think both teams will be motivated to try to get their seasons turned around.”

While the offense and defense are in that group that is trying to turn their season around, special teams is solidifying itself as one of the best in the country.

With his second kick return for a touchdown last week — one of three players in the nation to have as many — sophomore running back Rashaad Penny was named MW Special Teams Player of the Week and leads the nation in kick return average at 45.1 yards.

Special teams has played a large role this season for the Aztecs, keeping them competitive games against University of South Alabama and Penn State..

“With how the offense is playing, we are not getting the ball down there and our special teams is basically our offense on kickoff return,” Penny said.

However, this Bulldog team — which has statistically the worst punt return defense in the country and has allowed a punt and kickoff return for a touchdown this season — likely will avoid Penny and junior wide receiver and punt returner Lloyd Mills.

“If I was the other team I would stop kicking it to them,” Long said.

In terms of records, Fresno State finds itself in a similar situation to SDSU, since it is also coming off three straight losses. Like SDSU, two of its losses came against Power Five opponents.

Last week the Bulldogs fell 49-23 at San Jose State, where the Spartans tallied 543 yards and senior running back Tyler Ervin pummeled his way to a 300-yard, three-touchdown night.

Offensively, Fresno State has started three quarterbacks, two of which are out with season-ending injuries.

Redshirt-sophomore quarterback Zach Greenlee has been named the starter, after he served a one-game suspension last week because of an arrest on suspicion of public drunkenness.

This season he has completed 50 percent of his passes for 313 yards, while throwing six touchdowns to one interception.

“The starter going into the season is the guy coming back off suspension and obviously he was the starter for a reason,” Long said.

The ground game on the other hand, has been far less successful for the Bulldogs, who have only one rushing touchdown — tied for the fewest in the country.

Their leading rusher, senior running back Marteze Waller, will have to crack an Aztec run defense that held Penn State’s rushing attack to only 72 yards and no touchdowns.

Fresno State’s defense has tallied 12 sacks and nine turnovers forced on the year, but it still has found a way to keep head coach Tim DeRuyter scratching his head.

Through four games his defense has the second worst third-down conversion rate in the country at 57 percent and is allowing 444 yards and 45 points per contest — fifth worst in the country.

That all adds up to a potential breakout game for an Aztec offense that has been limited to seven touchdowns through four games.

Regardless of records, one of these teams will walk away with its first conference win of the season as another chapter of this long-standing rivalry.