Balance boards roll out on campus 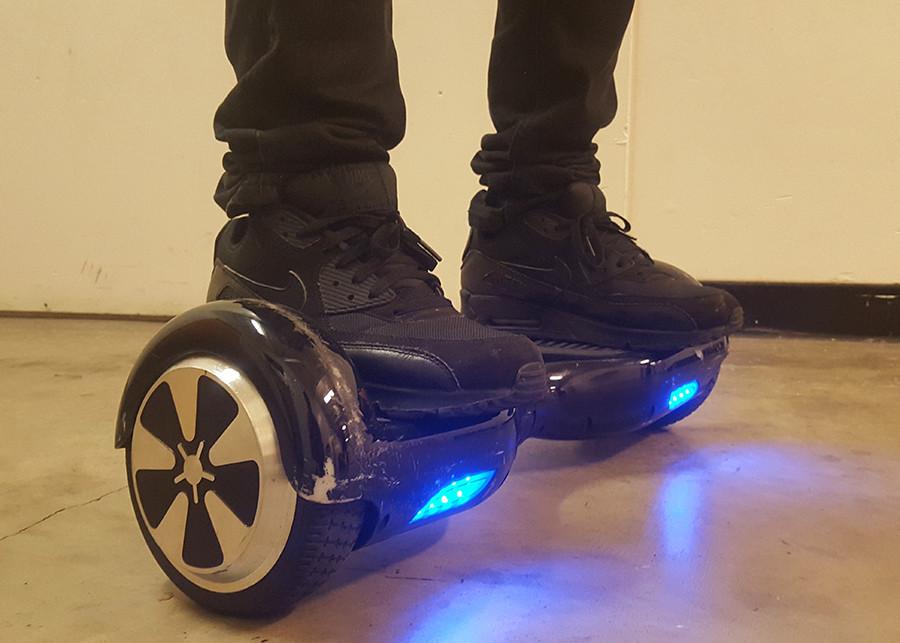 It’s a skateboard. It’s a Segway. No, it’s a brand new development in personal transportation.

Commonly referred to as hoverboards, despite not actually levitating, these self-balancing electric boards are popping up at San Diego State. And even SDSU President Elliot Hirshman is riding one.

The two-wheeled self-balancing boards vary by brand, but most of them can turn 360 degrees in place and can zip around at 6-12 mph.

This new form of personal transportation is in a grey area between skateboards and bikes, but the campus police have a plan for its permittance.

“Currently, the SDSU police department is treating the self-balancing electric boards in the same fashion as skateboards and bicycles,” SDSU Police Cpl. Mark Peterson said in an email. “They are permitted in designated areas on campus such as the campus bicycle lanes and Aztec Circle Drive.”

While the devices are allowed on campus, not all students are sold on their functionality.

“I don’t see a point to them,” junior political science major Andrew Rodriguez said. “You could speed walk past them.”

Rodriguez works at the front desk of Zura Residence Hall and has seen one person ride inside the hall and into the elevator.

“(The hoverboards) are kind of lazy,” freshman Kasey Nauton said. “You just stand on them.”

The boards have gained popularity primarily through social media with many celebrities, including NBA player J.R. Smith, Chris Brown, Justin Bieber and Wiz Khalifa posting about the devices on Instagram, YouTube and Vine.

IO Hawk, Oxboard and PhunkeeDuck are a few of the retailers selling the self-balancing boards, which cost anywhere from $400 to $1,800.

Chris Allen recently co-founded a company based in San Diego called EZ-Wheelz that sells the so-called hoverboards. He said EZ-Wheelz offers a board with 6-inch wheels for $439 and a model with 8-inch wheels that comes with Bluetooth speakers built-in for $499.

Allen said the boards are easy to ride, but he recommends that beginners should have someone there to assist them when they’re first learning. The board’s movements are completely controlled by balance and Allen said it takes about 10-15 minutes to get comfortable on the board.

Sophomore mechanical engineering major Abdullah Alkoot said he doesn’t know how students afford the boards, but he would ride one everywhere if he had the money.

The boards’ specifications vary by price. The most expensive boards, sold by IO Hawk, take three hours to charge, can travel 8-12 miles and can support up to 280 pounds.

The hoverboards were originally invented in China in 2014 by a company call Chic Robotics.

Many American companies have started selling a similar product and Walmart recently announced it will start selling the boards online around Nov. 1, according to Buzzfeed News.

Allen said he thinks hoverboards will be a big hit among college students, but people of any age can enjoy the product.