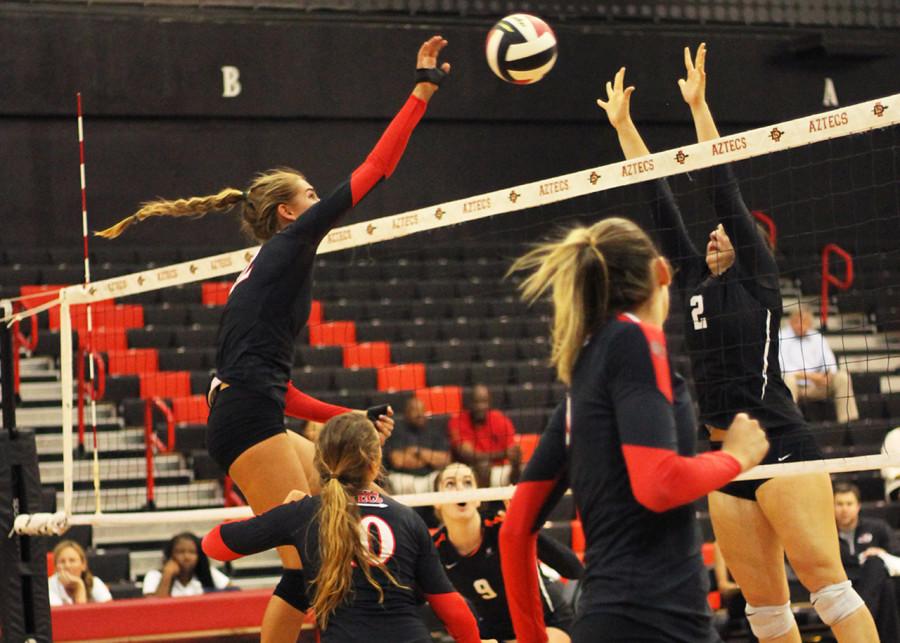 San Diego State volleyball and the University of Wyoming opened up their first meeting of the season with a long and entertaining rally that Wyoming eventually won. The match went similarly, as the Cowgirls won 3-0 in a competitive match at Peterson Gym on Thursday night.

The Aztecs played well to start the game against the No. 25 Cowgirls, hanging with them and only trailing 15-11 at the first timeout. Following the stoppage in play, the Aztecs rolled to a 19-18 advantage before Wyoming called timeout to stop the run. It worked, as the Cowgirls finished the set on a 7-3 run and won it 25-22.

Wyoming had an intimidating front line with three players taller than six feet. However, SDSU freshman outside hitter Alexandra Psoma didn’t think SDSU’s play was affected by that.

“I think we made too many errors in spiking and digging,” Psoma said after the match. “We have to place ourselves better on the court.”

“I thought we played with them and were as tall as them, they are just a more polished team than we are and they didn’t make mistakes when we did,” Collins-Parker said.

SDSU opened the second set and made some communication errors, letting some easy balls fall to the floor for Wyoming points.

However, the Aztecs stayed close until the middle of the set with the scored tied at 14. At that point, SDSU seemed to have won a point with a kill down the left sideline, but Wyoming protested the call. After a couple minutes of deliberation, the referees reversed the call to give Wyoming the lead instead of SDSU.

The call seemed to kill SDSU’s energy heading into the second half of the set. Collins-Parker protested the change to no avail and the Cowgirls went on to take the set 25-19. After the match, she gave her opinion on the call.

“It always hurts, things that kind of break you a little bit. But we can’t make an excuse with things that are that close and could go either way,” Collins-Parker said. “This year we’ve played close with a lot of good teams and haven’t found a way to finish them out. Once we figure it out, we can play with a top-25 team. We clearly have the ability to do it.”

It doesn’t get any easier for the Aztecs as they play No. 20 Colorado State on Saturday. They are looking to build off the positive early play against Wyoming and move on from the unforced errors that cost them Thursday.

“I think we will forget this game in order to move on to the next match,” Psoma said. “We didn’t play intense in the first set, but we turned it on and played better in the third set.”