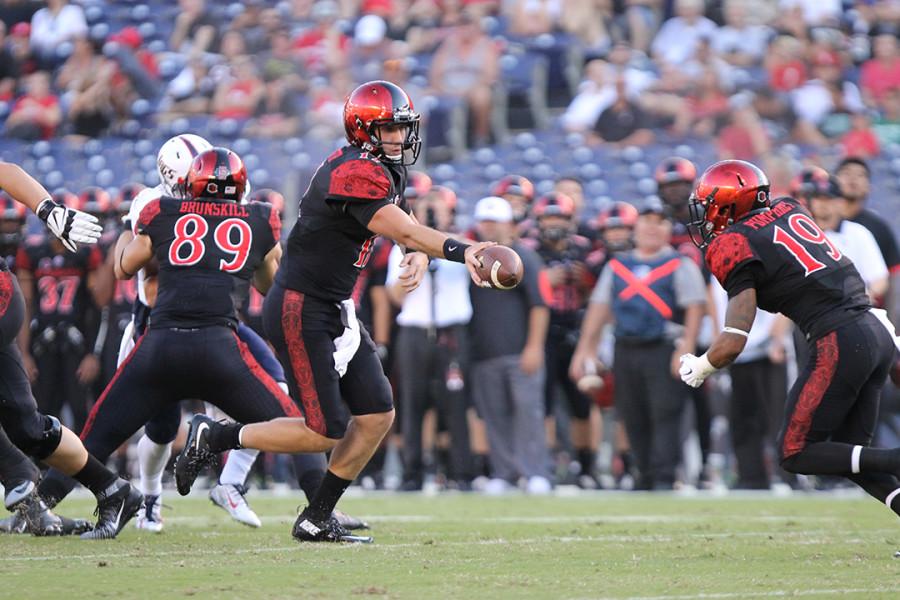 Boise State is the only team that’s truly separating itself from the rest of the Mountain West. Every other team appears that it could eek out a win or be blown out at any minute. This week features two in-state rivalries, a service academy game and the manufactured rivalry that is Fresno State and San Diego State.

This week’s odds were set at 5:30 p.m. on Thursday, Oct. 1, and come from vegasinsider.com. This is not gambling advice, nor meant to encourage gambling. Picks in bold.

Statistically speaking, graduate transfer quarterback Maxwell Smith is one of the worst quarterbacks in the Football Bowl Subdivision. He has the second lowest completion percentage and is in the bottom 10 in passer rating and passing yards per attempt. But SDSU head coach Rocky Long said the shortcomings of Smith and the running game is the offensive line’s fault, and that the offensive line played its best at the end of the Penn State game.

Last week Fresno State surrendered 300 yards rushing to San Jose State senior running back Tyler Ervin. In addition, Fresno State is 0-3 against the spread. The Bulldogs are in a bad spot, and if the Aztecs’ offensive line is improving, junior running back Donnel Pumphrey could have a big day.

People are betting against the Aztecs and the line adjusted to -8.5 from -9 earlier in the week. More fuel on the Aztec fire.

With Boise State’s starting quarterback out with a broken ankle, I thought the Broncos would struggle offensively, but boy was I wrong. The Broncos are firing on all offensive and defensive cylinders and it doesn’t look like they will lose another game this year.

MW fans should want Boise State to blow out Hawaii because Boise State is the only reason the conference is relevant in football this year.

Finally an in-state rivalry this season. This game is getting a lot of hype in Nevada, so much so that the mayors of the opposing cities have made a bet: The mayor of the losing team’s city has to wear the other team’s jersey for a day.

This game will be interesting because both defenses give up a high number of yards, and the offenses of both teams don’t turn the ball over. It will be close.

Utah State has the worst offense in the country, and not having senior quarterback Chuckie Keeton is surely going to be felt as the Aggies start conference play.

Colorado State comes into the game with a balanced offense and the biggest offensive weapon in the MW: junior wideout Rashard Higgins. He has 312 yards reviewing and three touchdowns despite missing a game.

Two big storylines going into this game are the way San Jose State is playing and the University of Auburn quarterback situation. Outside of San Jose, fans are shocked the Spartans have fared this well. The Spartan offense is putting up nearly 450 yards per game, but has thrown almost as many interceptions as touchdowns.

Auburn, on the other hand, is starting redshirt-freshman quarterback Sean White for the second game in a row. The Tigers are performing well below expectations this year, so this should be an interesting road trip for the Spartans. I think they can cover.

Air Force comes into the game with a quarterback looking to make his second start of the season. Senior quarterback Karson Roberts started his first game against Michigan State, a game which the Falcons lost by 14, but was actually much closer than the score indicates. He only threw the ball nine times, though. However, those nine chances turned into six completions and 149 yards.

Air Force’s defense has given up the fifth fewest yards this season, but I’m not sure it can keep up with Navy senior quarterback Keenan Reynolds, who has already contributed to 10 touchdowns this year and is five rushing touchdowns shy of setting the all-time FBS record.

University of Wyoming at Appalachian State (-25)

The last time these two teams met Wyoming steamrolled Appalachian State 53-7, and there is no doubt that the Mountaineers have reviewed that leading up to this game. Appalachian State is one of the better Group of Five teams, and this is a home game for the Mountaineers. There is a weather forecast for four inches of rain during this game. In the spirit of sportswriters creating ridiculous names for subjects, I will preemptively name this the Shower Bowl.

Wyoming has been one of the worst, if not the very worst team, in all of college football this season. The Cowboys’ starting running back, senior Shaun Wick, is injured and will not play. The Cowboys’ defense has also given up nine touchdown plays of 35 yards or more.

Twenty-five points seems to be high, but what the heck let’s all cheer Wyoming on to one of the worst seasons of all time.

Another in-state rivalry which has the home team as a 13-point underdog. New Mexico has been another bad team, but last week it secured its first win over a FBS school. The Lobos’ opponent, the New Mexico State Aggies, have not won a game all season and have not won a game since these two teams met last season. Remember that New Mexico covered for me last week. *coyote howls*

About Mountain West Pick ‘Em: Kris Keehl is a sports columnist for The Daily Aztec. Each week he picks Mountain West games against the spread. Play along and criticize him @IamKRISKEEHL.