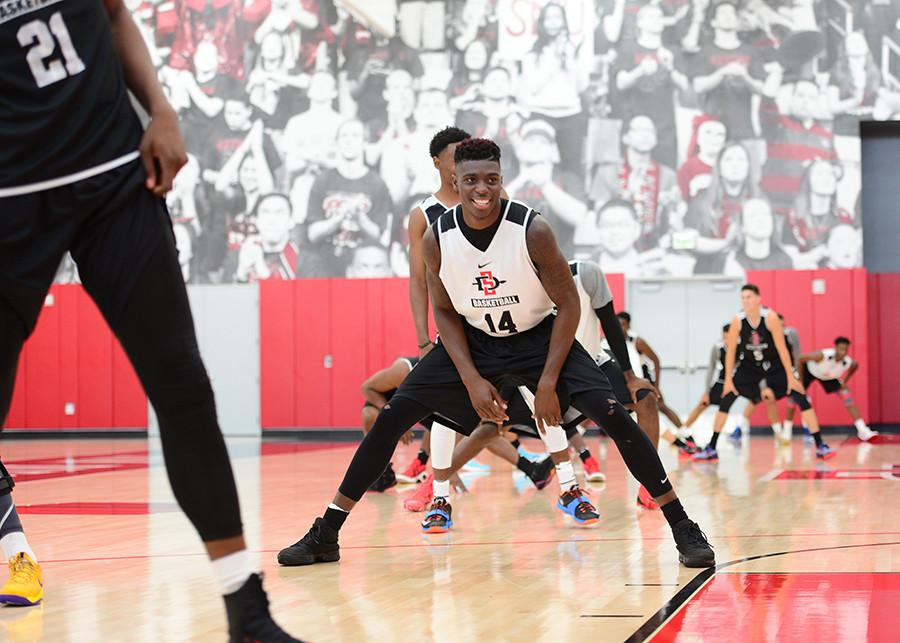 The Jeff Jacobs JAM Center is the shiny new toy of San Diego State athletics, and its utility was on full display Friday during men’s basketball’s first official practice.

The JAM Center features two parallel courts, eight baskets and a mural of The Show on the wall.

On the left court, co-captains and senior forwards Winston Shepard and Skylar Spencer worked to refine their free throw shooting, an area where they shot 67 and 48 percent, respectively.

The Aztecs are returning Shepard, Spencer, senior forward Angelo Chol and sophomore forward Malik Pope in a very experienced front court, but over the past two years the Aztecs have lost back court and point guard experience with the graduation of Xavier Thames and Aqeel Quinn.

Last season sophomore guard Trey Kell started the first 15 games and junior guard D’Erryl Williams saw time at point guard, as well. The 2015-2016 team only has four guards on scholarship and one of them is freshman four-star recruit Jeremy Hemsley.

“Well everyone is talking about, ‘What will Jeremy Hemsley do?’ And I’m anxious to see that also,” Fisher said. “I like what I see.”

“I think we’ll have adequate backup if (Hemsley) proves to be the guy, or others who can do it,” Fisher said.

The others available to play point guard are Kell and Williams.

As far as Williams goes, Fisher made sure to point out that he has improved over the offseason.

The only scholarship guard that was not mentioned in the point guard conversation was junior Dakarai Allen, who averaged 12 minutes a game over 33 games last season, but has played more as a shooting guard and not a point guard.

Shepard addressed the media and said the Aztecs want to to be a great defensive team and continue to get better on offense.

“Scoring 40 points is not in our game plan,” Shepard said.

Shepard said with the new JAM Center there was no excuse for he or his teammates to not work on improving their game, and he plans to use that work to win games.

Spencer also talked with media members about how he has matured and is now passing some of his knowledge down to the younger players.

“Over the summer I focused in on certain go-to moves, and I have been hammering those down, so I can improve on my offense, so I’m pretty confident in it now,” he said.

Fisher talked about the alleged NCAA recruiting violations and said he was surprised when they surfaced.

“You knew when I knew,” Fisher said. “You heard when I heard and you heard what I heard. So, I’m not aware exactly what they are talking about.”

Fisher said that he and athletic director Jim Sterk reached out to the NCAA upon hearing the allegations.

“We initiated the call to the NCAA, and we were the ones asking them the questions,” he said.

Fisher said the basketball program is not under NCAA investigation, but that the NCAA was looking into some allegations.

Fisher also said that he was not going to get into more detail, and he reiterated that he and his staff are well aware of the NCAA rules and that they follow them.