Tasty Tuesday: The Taco Stand’s prices are not going up on a Tuesday 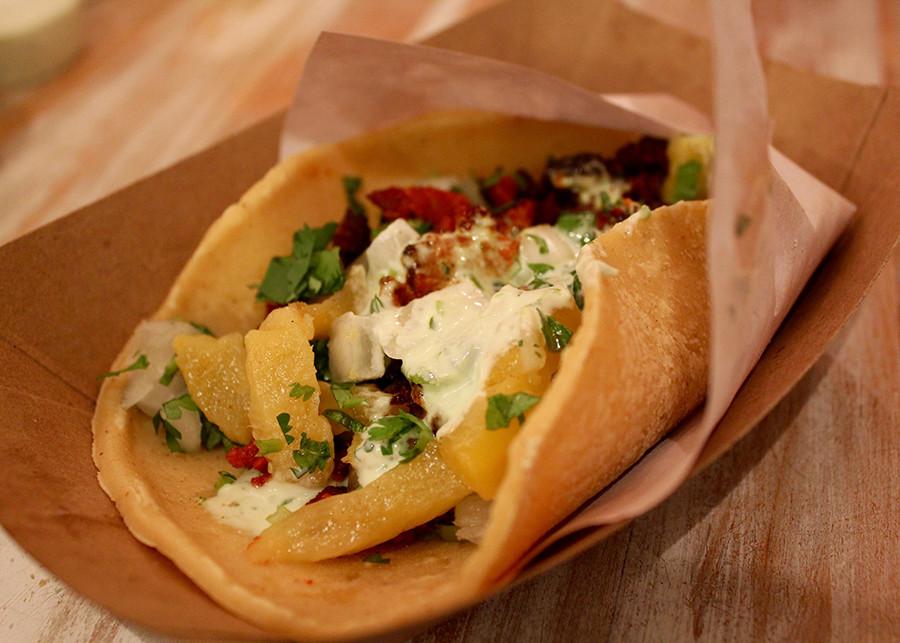 If anything’s going up on a Tuesday, it’s not the price of The Taco Stand tacos.

Located less than two miles from the shoreline on Pearl Street, family-owned taqueria The Taco Stand originally opened its doors to the public in 2013, and another location in Encinitas is scheduled to open later this year.

The establishment offers indoor table and outdoor bench seating. The set-up allows small groups to inhale the mouth-watering aroma of marinated pork and large groups to soak up the sun and enjoy the occasional sea breeze.

The Taco Stand opens at 11 a.m. every day and closes at 9 p.m. on weekdays and 10 p.m. on weekends, giving La Jolla residents plenty of time to enjoy what it has to offer.

The restaurant’s menu includes a variety of options for breakfast, lunch and dinner, but The Taco Stand sees its largest crowds during the evening hours — especially on Taco Tuesday, when the price per taco goes down.

The shop has an assortment of tacos. One of the most popular tacos, the $3 Al Pastor, consists of rotisserie marinated pork on a corn tortilla, topped with cilantro, onion, cilantro sauce, salsa and, interestingly, pineapple.

The Taco Stand offers several sauces for its dishes, including mild chipotle, medium heat cilantro and salsa verde. However, it’s recommended to try the taco individually without the sauces to absorb the spiciness of the cilantro sauce and the sweetness of the pineapple in a single bite.

While a California burrito, $7.09, can certainly be enjoyed at almost every Mexican-food establishment, it never hurts to try another.

The Taco Stand’s take on the classic entree features Angus steak, cheese, fries, guacamole, tomato and sour cream wrapped in a flour tortilla. As a general warning, don’t be surprised if the first bite contains solely tomatoes, because every following bite is a mixture of the remaining ingredients. The freshness of each ingredient pairs nicely with the plethora of sauces mentioned earlier. In the simplest terms, go crazy.

“I’ve had California burritos from restaurants all over San Diego during my three years here, but this burrito is by far the best,” public health junior Danielle Ralleca said. “I’d easily recommend this place to anyone, especially if you’re in La Jolla.”

The crowd-favorite surf and turf burritos are commonly held on high regard. Although, the Mar y Tierra burrito — which is $8.29 and features grilled shrimp, Angus steak, melted cheese, cabbage, avocado, tomato and chipotle sauce wrapped in a flour tortilla — may lose in a taste test against other local restaurants offering almost identical dishes. The Angus steak is seasoned to perfection, but the seasoning on the grilled shrimp was lacking and seemingly thrown in for the added texture.

A two-burritos-and-taco combination totaled to $18.38 plus tax, which is more than affordable for such advanced combinations of flavors.

Besides the array of tacos and burritos on the menu, The Taco Stand also serves imported bottled beer, as well as Mexican Coca-Cola, Jamaica and horchata.

For customers craving something sweet, fruit popsicles in a variety of flavors, as well as Rosarito-style churros, three per order, are also available.

Considering that unlike every other San Diego neighborhood, there is a lack of quality-rate, authentic Mexican restaurants on every street corner in La Jolla, The Taco Stand is there to save the day. It is a great taco option for locals after a long day at the beach.