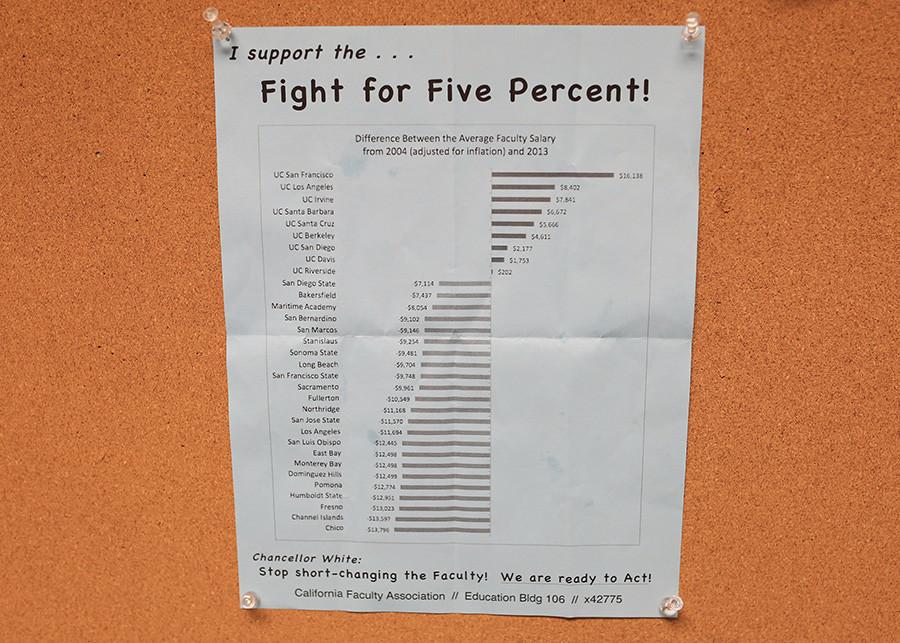 California State University faculty is threatening to strike at all 23 campuses if the CSU chancellor’s office does not resolve the deadlock over salary negotiations.

The California Faculty Association announced in a phone press conference Wednesday, Sept. 30 that it would conduct a 10-day vote beginning Oct. 19. The vote would decide if faculty would go on strike amid the gridlocked contract negotiations with the CSU chancellor’s office.

The CFA has demanded a 5-percent increase in salaries next year with an additional 2.65-percent hike for faculty to the lower end of the pay scale, but CSU management has refused.

CSU administrators have instead offered them a 2-percent across-the-board pay hike.

CSU Vice Chancellor of Public Affairs Laurie Weidner said this 2- percent increase is valued at $32.8 million, whereas the faculty union’s proposal has a value of $102 million.

Jennifer Eagan, president of the CFA and professor of public affairs administration at CSU East Bay, believes the CSU system has the money to pay their teachers more because they continue to increase the salary of campus presidents instead of using that money for teachers.

“Teaching jobs in the CSU system are being treated like jobs in the fast food industry,” Eagan said in the press conference. “Every year, administration hires teachers just before the school terms begins and are given much lower pay, causing a number of faculty to fall out of the middle class.”

Union leaders argue these trends do not improve learning outcomes for students.

When six CFA faculty members testified about an increase in teacher salaries at the CSU Board of Trustees meeting earlier this month, the board of trustees listened to them, then continued with business, Eagan said.

“We can’t have anymore business as usual,” Eagan said. “Unfortunately, the innovation being implemented by the CSU management is in the area of more managers and administrators and more pay for doing that work. Meanwhile the number of permanent teaching jobs sinks.”

“It’s time for management to wake up and realize that they can’t keep acting like corporate CEOs,” said Kevin Wehr, chairman of the CFA bargaining team and Sacramento State University sociology professor.

The CFA is currently in the mediation stage, which is supposed to settle the CSU faculty contract by bargaining. The next mediation session is scheduled for Thursday.

If both sides do not come to an agreement at this stage they will continue to the fact-finding stage, where a third-party moderator will listen to the CFA’s argument. The CSU chancellor would then have to explain his reasoning for offering faculty a 2-percent raise.

During the press conference, the union leaders said if an agreement is not made in the fact-finding stage, they will have the option to strike.

As this story develops, The Daily Aztec will continue it’s coverage in print and online at thedailyaztec.com