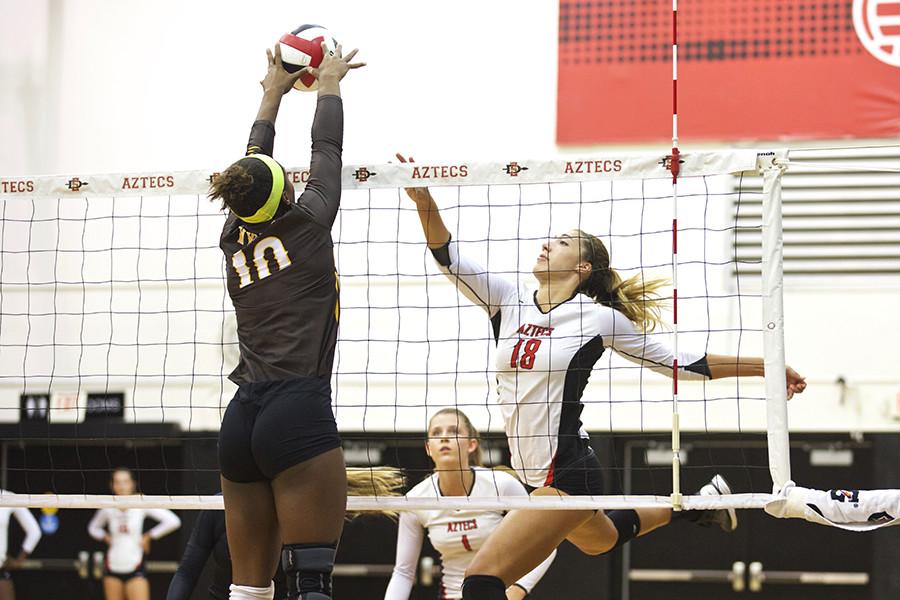 SDSU continues conference play with two more road matches before its comes home. The road trips begins on Thursday at Cox Pavilion in Las Vegas, when they take on UNLV at 6 p.m. On Saturday, the Aztecs travel to the Save Mart Center  to take on Fresno State University at 1 p.m.

The team is coming off a two-game weekend home stand against two Top 25 opponents in University of Wyoming and Colorado State University. While SDSU lost both matches, it played well in spurts against both opponents.

She’s led the team four times in that category and still has the team high in kills for the season with 18 against Denver back in August.

“Alexandra is so important to our team, this is why we recruited her. She has the ability to be really good and I hope she continues her level of play this week,” head coach Deitre Collins-Parker said.

UNLV boasts a 9-6 overall record and a 2-1 conference record so far this season. What’s eye-opening, though, is its 7-0 home record. Redshirt junior Bree Hammel leads the Rebels in kills (168) and kills per set (2.95) after being named after being a first-team All-MW selection in 2014.

“Hammel is a good player that we need to work hard to contain and try to slow her down. They lost some outside strength, which should help us be focused on her,” Collins-Parker said.

Fresno State holds a 9-8 record, while going 1-2 in conference. Sophomore outside hitter Carly Scarbrough set her career high in kills last Saturday against Boise State with 22, but the Bulldogs ultimately fell 3-2 in five sets.

The Bulldogs will welcome volleyball alumni to the game against the Aztecs on Saturday, in preparation for their homecoming football game later that night.

For the Aztecs, the travel is no doubt a factor in their quest for a victory at UNLV and Fresno State this week. The Aztecs have had a road-heavy schedule thus far this season and were home for two brief games in conference play before they hit the road again this Thursday.

Despite the 4-12 record, Collins-Parker doesn’t believe the roads are the only problem.

“We are comfortable being on the road. Hopefully we can go play hard in Las Vegas and Fresno because it is not foreign for us to be on the road,” Collins-Parker said. “It will be great to be back in San Diego because we haven’t spent two weeks at home yet.”

This will be the end to long road trips l for the Aztecs until Oct. 29, as four of their next five matches will be at home. The “road” game will be at University of San Diego, making travel no more than a car ride away with no nights in a hotel. For the Aztecs this is welcomed news as they have largely been nomads this season.