Monday Morning QB: Why did SDSU use an injured Pumphrey late against Hawaii? 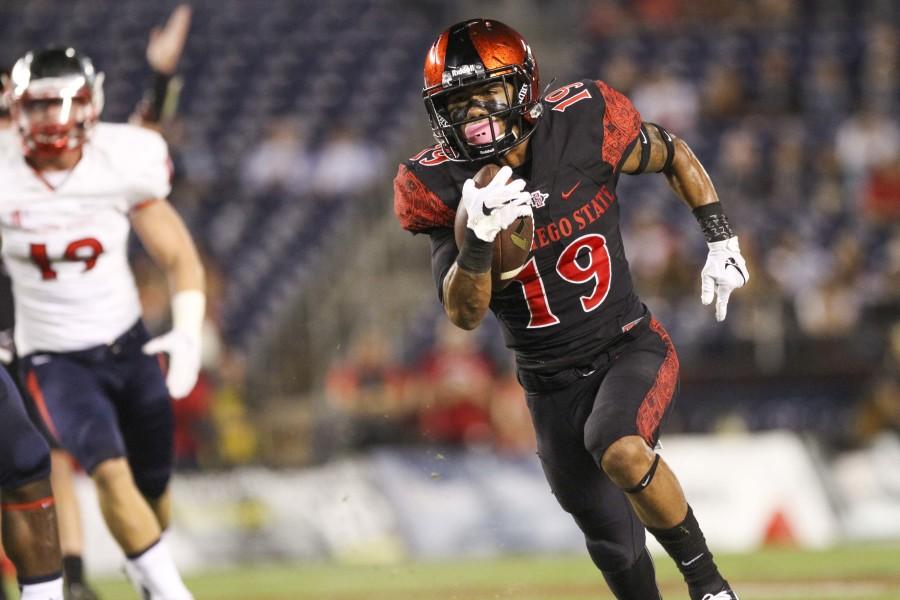 In addition to being a superstar running back and the face of San Diego State football, junior Donnel Pumphrey is apparently impervious to injury.

After leaving the game in the Aztecs’ victory last weekend against Fresno State, head coach Rocky Long said Pumphrey would be out “a couple of weeks.”

To the surprise of everyone and the obvious delight of Long, Pumphrey started and shined on Saturday against the weak University of Hawaii defense, running 30 times for 148 yards and three touchdowns.

The game was far and away his best performance of the season.

But at what risk?

Has the coaching staff learned nothing from its past mistakes?

Just last week, Pumphrey was overworked straight into a boot on his ankle by the fourth quarter of the Aztecs’ victory over Fresno State.

Long and his coaching staff, especially offensive coordinator Jeff Horton, have shown time and again their overbearing affinity for Pumphrey.

Even with three talented backs behind him, and a weak ankle, Horton still ran Pumphrey 30 times.

The excitement of having him available for the game might have affected their play calling.

It shocked fans, media and the like when Pumphrey joined the huddle to start the game.

In preparation for the game, the general understanding was that senior Chase Price would start against Hawaii, and sophomore running backs Rashaad Penny and Marcus Stamps would be featured in greater roles on offense in Pumphrey’s absence.

At virtually every other Mountain West school, each one of these backs would be far and away the best option.

Hawaii would gladly take Penny off of SDSU’s hands, considering it was only able to muster 53 rushing yards on Saturday night, and Penny has contributed 112 yards on only eight carries.

Penny has yet to see significant touches on offense despite his explosive play and the assurance from Long.

“He’s being so productive, you’ve got to find a way to get him the ball,” Long said in the week prior to the Fresno State game.

That week, Penny saw increased involvement in the offense, especially after the short-lived departure of Pumphrey.

But with the return of the star this week, Penny was married to the bench.

Even with a lead of 28-14 and no clear sign of Hawaii finding offensive success, Horton had Pumphrey handle the ball eight more times late in the game.

Running him endlessly in the first quarter, while not preferred, is acceptable.

And with his dominance, even a steady dose of second-half Pumphrey makes sense.

But Pumphrey in the fourth quarter with a weak ankle and the game already put away is an unwelcome sight.

But what does the coaching staff think is going to happen if they take Pumphrey out of the game?

It would be easy to say that Pumphrey’s workload is understandable, with SDSU’s soft passing game and Pumphrey’s talent.

But the coaching staff has so much talent at its disposal. What is the point of risking Pumphrey’s health and the fate of the Aztecs’ season just to pad his stats?

Week after week, Long discusses how vital Pumphrey is to the Aztecs.

The players share the sentiment — even Pumphrey’s backup, Price, who has played well in the opportunities he has gotten, rushing for 377 yards and averaging 5.4 yards per carry.

“We need him to win,” Price said after the game against Fresno State.

Hopefully, the coaches can figure that out for themselves and use their whole toy chest of backs before they risk losing the one they love so much.