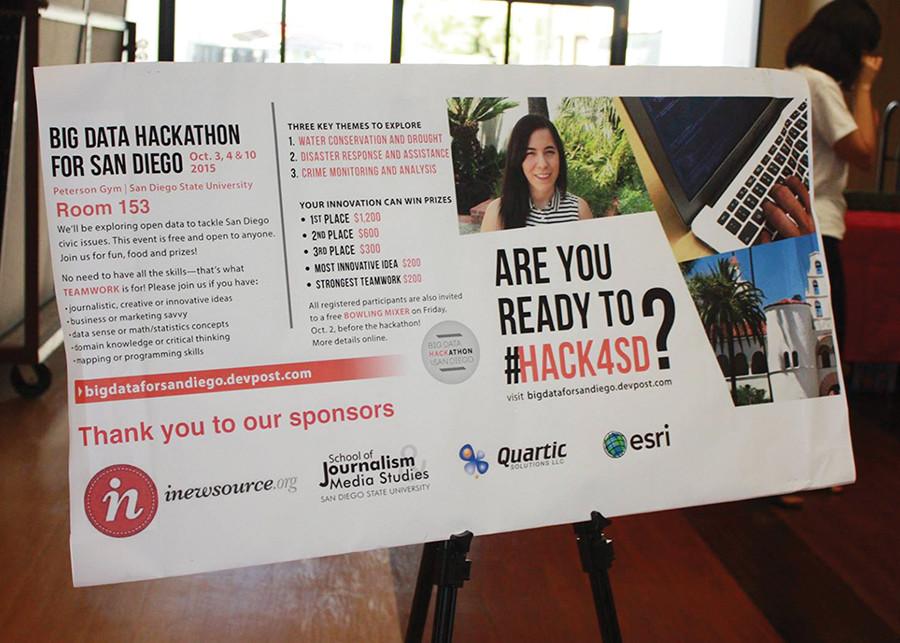 The winners of the Big Data Hackathon, a San Diego State competition where participants developed a new mobile app that would serve the local community, were announced Saturday.

Students with expertise in mapping, marketing, data, critical thinking, programming and journalism gathered at Peterson Gym on Oct. 3, 4 and 10 and competed in teams to develop their ideas.

Each team was required to create one app that informs people about water conservation, crime monitoring and prevention, or disaster response and assistance.

First place was awarded to team Water Savers for their water conservation app.

Second place went to team Dozier, who created an app that could help victims request help in the event of a disaster.

Third place and the award for social justice was given to team Any Aware, who created an app that could track down different crimes happening in the community.

Amy Schmitz Weiss, one of the co-organizers for the event and an associate professor for journalism and media studies, said these three themes were identified as areas of concern for San Diegans.

Schmitz Weiss said this event is important for potential journalists whose profession is becoming more data-driven.

“Journalists have an important role and obligation now in our society as data is becoming more accessible, and it’s also becoming, in more ways, more digital and stored in a variety of ways for journalists to be able to tell stories with this data,” Schmitz Weiss said.

Senior Davis Vance, a quantitative economics major, was one of the members of team San Diego Emergency Participatory GIS, which stands for geographic information system. His team developed an app that could pinpoint infrastructure damages. This included downed power lines or animals killed on the road. Vance said the Hackathon competition is an important way for SDSU to encourage innovation.

Rutvij Kothari, a computer science graduate student, was a member of the Water Savers team. His app used a survey to help users understand how much water they are using and how they can limit their intake to save water. Kothari said the event is a unique way for students to contribute to the community.

“It is really important to the community,” Kothari said. “California has so many problems like the drought. So this is a chance to give something back to society. It is beneficial to apply our knowledge for the community to work for them.”

These types of events, Schmitz Weiss said, are beneficial because they bring together people with different backgrounds to solve important problems in society.

“People get a chance to meet someone new, to learn some skills in the process and at the same time perhaps help people and the community,” she said.