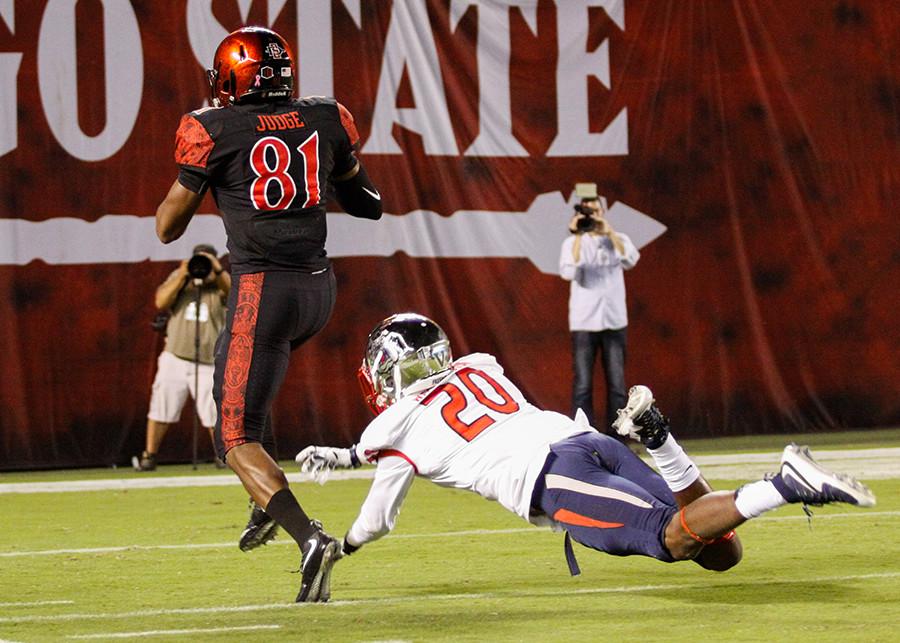 There will be more on the line than simply a win on Saturday when the San Diego State Aztecs (3-3, 2-0 Mountain West) and the San Jose State Spartans (3-3, 2-1 MW) clash in Northern California.

A win for either team will guarantee at least a one-game lead in the MW’s West division and put it in control of its own destiny.

But this win will mean a little extra for the Aztecs, as it will mark the best start to conference play under head coach Rocky Long and their first back-to-back wins since, ironically, beating the Spartans and the University of Hawaii in consecutive weeks in 2013.

However, this is not the same SJSU team that was a minute away from being shutout by SDSU in the final regular game last season.

“On the western side of the conference I think San Jose State is playing the best football right now,” Long said. “They are 2-1 in the league and we’re 2-0 in league, so I think it’s a highly important game.”

The Aztecs and Spartans enter this game walking similar paths, as both teams began the season 1-2, but were rejuvenated after muzzling the Fresno State Bulldogs at home.

These two teams also sport two of the most dynamic running backs in the nation in SDSU’s junior Donnel Pumphrey and SJSU’s senior Tyler Ervin. Nonetheless, Ervin has had the better of the two seasons so far and is making a name for himself nationally.

“They probably (have) the top offensive threat in our league right now in Tyler Ervin,” Long said.

He’s proven a headache for every team SJSU has lined up across, including the University of Auburn. He ran for 160 yards on 5.9 yards per rush against the Tigers.

The Aztecs’ defense is primed to get after Ervin, though.

“He’s a great athlete,” SDSU junior linebacker Calvin Munson said. “He can catch. He can run. He’s their kickoff returner. He kind of reminds me of DJ (Pumphrey) in that he’s explosive and makes plays happen.”

Stopping Ervin will be important as the rest of the offense feeds off his ability to open up the passing game. The Spartans have alternated signal-callers, but they appear to have settled on their guy, junior Kenny Potter, who is completing over 67 percent of his passes and has thrown three touchdowns on the year.

Potter also has the ability to run the zone-read offense and is dangerous when he leaves the pocket, as he is the second leading rusher behind Ervin.

For the Aztecs, they return from their 28-14 win over Hawaii losing key members on the defensive side of the ball.

Junior linebacker Randy Ricks, who was finally figuring out the defense and making plays for the Aztecs, will be out for 4-6 weeks with a broken toe. The first substitute along the defensive line, sophomore Dakota Turner, is expected to miss the rest of the season with a torn ACL, according to Long.

“(Turner) was playing extremely well, so that hurts your depth there, too,” Long said.

But with the loss comes some gains as SDSU returns its four suspended players. Senior offensive lineman Darrell Greene and sophomore linebacker Fred Melifonwu headline the players returning to the fold.

Although Greene has not practiced with the traveling squad all year, his time on Saturday will be determined during the week’s practice. With Ricks’ injury, Melifonwu’s chances to receive playing time were helped.

Offensively, the Aztecs look to continue their ground-and-pound play and run it down the Spartans’ throats. In their last two games SDSU has run the ball 117 times out of a possible 142 offensive plays.

“We’ve won our past two games,” SDSU graduate transfer quarterback Maxwell Smith said. “I think we have a good formula going. I don’t want to mess with a good formula but I think we definitely have the ability to air it out when need be.”

This game will ultimately come down to which offense can stop the run and force the opposition into a one-dimensional offense.