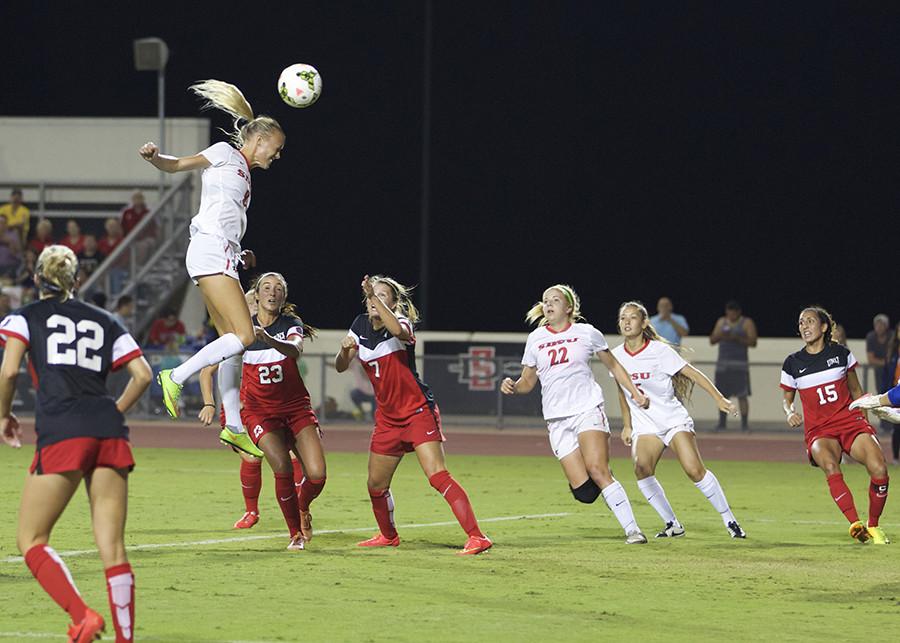 An important yet bittersweet weekend lies ahead for San Diego State women’s soccer (9-4-0).

Important, because this weekend could decide who will hold sole possession of first place in the Mountain West regular season standings down the final stretch of the season.

The Aztecs are currently tied for the MW lead with San Jose State entering the final homestand of the regular season.

Bittersweet, because the final homestand of the regular season is headlined as “Senior Week.”

“It’s kind of surreal,” Hauke said. “These past four years have flown by.”

Aztecs head coach Mike Friesen said his team will have to maintain focus amid the potential distractions of the pregame ceremonies.

“It’ll be a special day for those three seniors,” Friesen said. “It’s their moment to talk about all of their accomplishments they’ve had to this point. But we also want to make sure that we’re pushing for it, and we want their best season to come here at the end.”

Following a rough start to the season, the Bulldogs have clawed their way back into contention in the MW. Fresno State lost its first six games, but have since turned it around in conference play, sitting No. 5 in the standings with 10 points.

This past weekend, Fresno State junior defender Angie Weiner won MW Defensive Player of the Week for her role in two consecutive shutouts for the Bulldogs.

“They’ve always been a physical team since I’ve been here,” Hauke said. “We’ve always had some challenges playing them the past couple years.”

But confidence is key, and Hauke has full faith in the Aztecs’ game plan heading into the match.

The Aztecs then turn their attention to San Jose State, the team they currently share the conference lead with, in a pivotal Sunday afternoon meeting.

The game could also prove to be a matchup of the two best freshman in the MW: SDSU forward Leah Pruitt and SJSU midfielder Darriell Franklin.

The matchup could also be a goalkeeping battle.

Hauke has been surprised by the Spartans this season, saying they have been a better team than everyone had anticipated.

“We’ve been hearing that they’re a completely new team,” Hauke said. “We’re expecting a good game with them, too, because they’ve been beating teams that we weren’t expecting at all, and they’re tied in first with us.”

The Spartans must have made some large improvements, based on Hauke’s assessment of them from last year.

“It makes me look forward to how they’ve actually been playing,” Hauke said. “Compared to last year, they weren’t that good, so I want to see what’s new to them this year.”

Heading into this bittersweet yet crucial weekend, Friesen is excited with his team’s play to this point and is confident they can keep it rolling.

“We’ve actually hit a really good spot in the year right now, where we’re playing very good soccer,” Friesen said. “We’ve come together as a group really, really well, so I feel like we’re in a very good spot.”