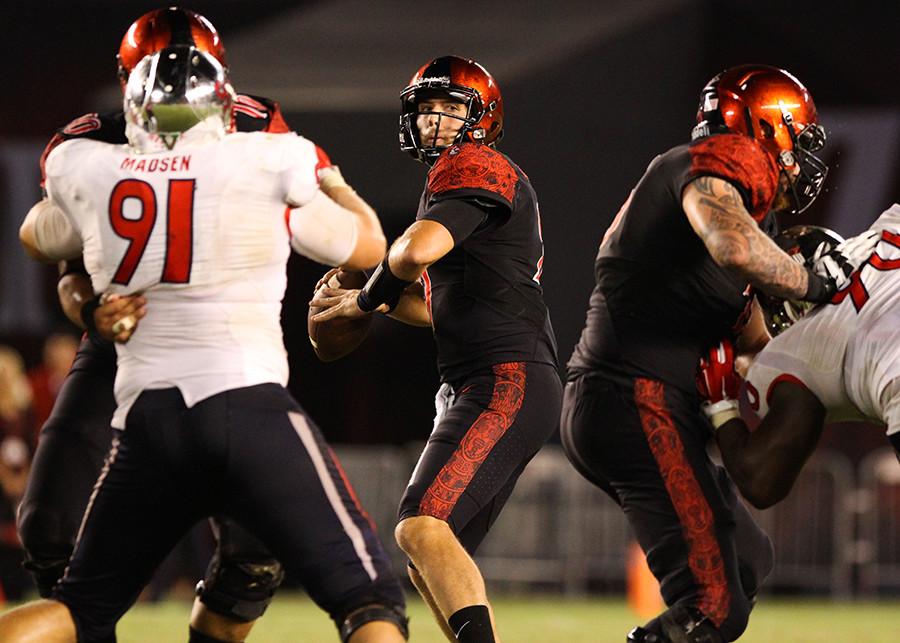 In this week’s pick ‘em, the top teams in the Mountain and West divisions of the Mountain West face off, Fresno State has another twist in its erratic quarterback situation and two of the worst teams in the conference get set to square off.

Each week, Kris Keehl picks MW games according to the spread. Play along and criticize him @IamKRISKEEHL.

Boise State is 3-0 against the spread in its last three games. Freshman quarterback Brett Rypien continues to outperform any other quarterback in the MW. In his last game, he threw for 339 yards and a touchdown and rushed for a touchdown. Sophomore running back Jeremy Nichols leads a strong running game with nearly five yards per carry and 12 touchdowns on the year.

Utah State’s defense will be a focal point in this matchup. The Aggies have surrendered the seventh fewest yards in the country all season, which is enough to make them the best in the MW.

The quarterback problems at Fresno State are starting to get comical.

Quick recap: sophomore quarterback Zach Greenlee was named the starter for the 2015-16 season. Early in the second game, Greenlee was replaced by freshman Virgil Chason who started week three, and in that game sustained a season-ending injury. The fourth game was started by University of West Virginia junior transfer Ford Childress, who suffered a season-ending injury. After two season-ending quarterback injuries and an alcohol-related arrest, Greenlee recaptured the starting job, but lost it when he only managed to throw for 77 yards against San Diego State. Freshman quarterback Kilton Anderson started the following game and threw three picks. Anderson is now the starter going forward. Yikes.

Defenses have a hard time predicting where the Falcons’ offensive attack is coming from. Air Force features multiple running backs, quarterbacks included, that combine for a few hundred yards each game. The only thing opposing defenses can count on is a pedestrian passing performance from senior quarterback Karson Roberts.

Last week Colorado State got ran over by Boise State, but who doesn’t? The problem with Colorado State is the lack of consistency in getting the ball to its playmakers. In addition to the offensive woes, the defense has given up 400 or more yards in its last three games.

Wyoming is still on a quest to be the worst team in college football this year, but let’s take a minute to understand why the Cowboys are struggling. Wyoming has suffered multiple concussions at key positions this season, and the Cowboys have played 26 true or redshirt-freshman this season.

It’s hard to tell which Nevada team is going to show up every week. Are we getting last week’s Wolfpack team that racked up 500-plus yards of total offense, or are we getting a team that will turn the ball over at will? Nevada couldn’t possibly let Wyoming cover, could it?

Note: Nevada has the weakest conference schedule over the next three weeks. By the end of this stretch the Wolfpack could have a 4-1 conference record.

Hawaii was annihilated by SDSU’s rushing attack last week, and that is all you need to know about Hawaii.

The only thing you need to know about New Mexico: It has one of the best rushing attacks in the country.

Coming into this game the Aztecs and Spartans hold first and second place in the West division of the MW. From this point forward, refer to this game as “The Best in the West Bowl.”

SDSU continues to dominate on the ground, even with a hobbled junior running back Donnel Pumphrey. SDSU’s rushing attack should be helped by the fact that the Spartans have given up the eighth most yards on the ground in the country this year. SDSU also looks for graduate transfer quarterback Maxwell Smith to duplicate his efforts after his best passing performance of the season.

S is 4-2 against the spread, and features a running back with the second-most yards in Football Bowl Sudivision football, but the Aztecs only surrender three yards per carry to opposing running backs.

Pick: Aztecs
This weeks odds were set at 5:30 p.m. on Thursday, Oct. 15, and come from vegasinsider.com. This is not gambling advice, nor meant to encourage gambling.