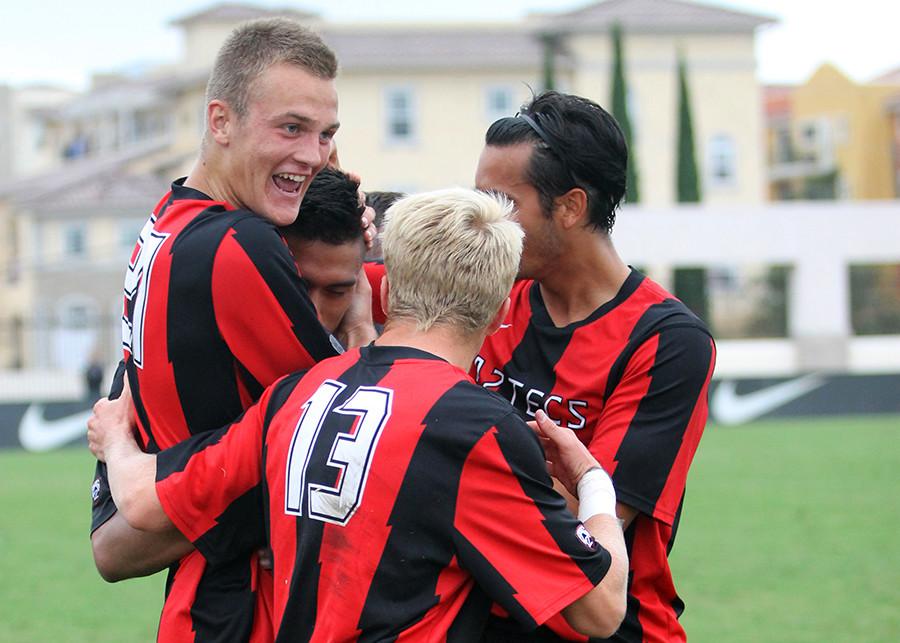 After losing its last three matches on the road, San Diego State men’s soccer returned to the SDSU Sports Deck on Friday night and shut out UC Berkeley 1-0.

The Aztecs desperately needed to get up on the scoreboard after being scoreless since the start of Pac-12 play.

SDSU had its first chance to score in the 18th minute when sophomore forward Jeroen Meefout received the ball from senior forward Rene Reyes from the top right corner of the box. Meefout slid in an attempt to score but slightly missed, leaving the ball to roll out to the left of the net.

In the 23rd minute, junior midfielder Casey Macias broke away from Cal’s defense and dribbled the ball from the half-way line to the box. The Golden Bears’ defense eventually caught up to him, and Macias’s shot fell off short.

The Aztecs continued to pressure the Bears, and in the 44th minute, their efforts were rewarded.

Macias drew a foul outside the 18-yard box, and Meefout took the free kick. Sophomore midfielder Ozzie Ramos received the ball straight from Meefout and struck it into the center of the net.

Not only was this the first goal for SDSU since the start of Pac-12 play, but it was the first for Ramos in his collegiate career.

“It was a great feeling (to score),” Ramos said. “It’s what the coaches have been asking for.”

The first half ended with the Aztecs leading 1-0.

SDSU continued to dominate in the beginning of the second half, but Cal was determined to fight back.

In the 57th minute, Cal junior forward Christian Thierjung received a pass from sophomore forward Paul Salcedo and shot the ball toward the center of the net. SDSU’s sophomore goalkeeper Adam Allmaras blocked it.

SDSU’s next chance to score arrived in the 70th minute after junior forward Luke Ackerman drew a foul inside the 18-yard box. Reyes took the penalty and shot the ball toward his left, but it went directly into the hands of Cal redshirt-senior goalkeeper Alex Mangels.

The Bears continued to fight back, but the Aztecs’ defensive line kept tight until the last second of the game, securing their 1-0 victory.

With junior Travis Nicklaw returning to the team after competing with Guam’s national team last week, SDSU was able to solidify its back line.

“It was nice to get our starting four back together again,” head coach Lev Kirshner said.

“(Home advantage) definitely helped,” Ramos said. “We don’t have to travel or accommodate to a different situation.”

The match was also a battle between Kirshner and Cal head coach Kevin Grimes as they are the two longest tenured coaches in Pac-12.

“I’ve been coaching against Kevin Grimes since we both got started,” Kirshner said. “He knows me. I know him. Everything we expected from (California) took place today.”

SDSU will next go against No. 3 Stanford University on Sunday at the SDSU Sports Deck with a different approach.

“This is the one game that changes all of our tactics,” Kirshner said. “They have certain things that they try to do, and we’re going to try to negate it with stuff we really never do. It will be interesting to see what we can execute.”