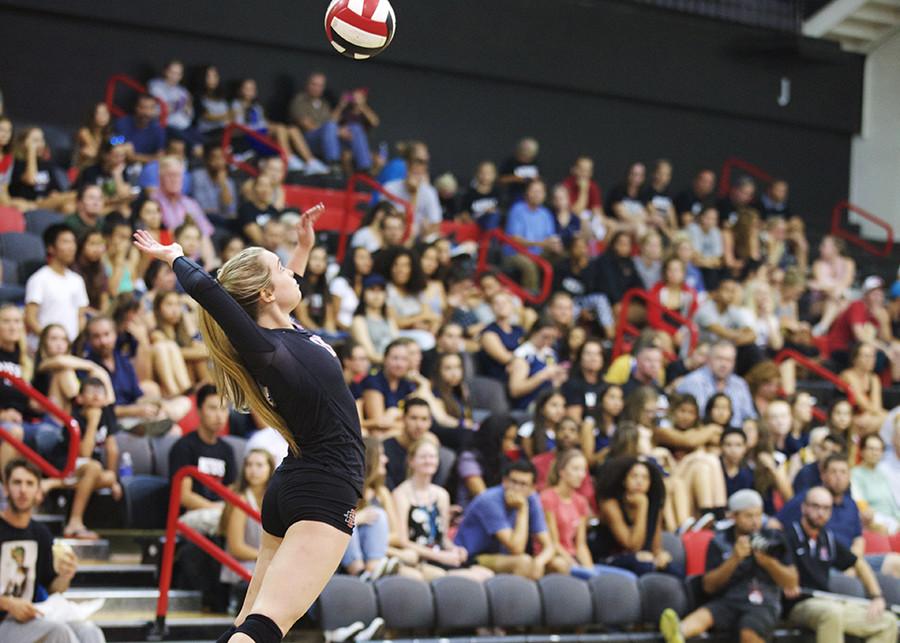 The first set opened up evenly, with SDSU calling timeout down 11-8. Following the stop in play, Boise State slowly pulled away only to have SDSU tighten the game at 23-22 in favor of the Broncos. The set went to a pivotal point tied at 24 when SDSU let a ball fall on a miscommunication and lost the set 26-24.

The second set opened just as close, with the score tied 8-8 and lead changes back and forth until the score was again tied at 23. The Aztecs closed the set 25-23 to even the match at 1-1.

The third set stayed close throughout as well, with Boise State up 16-15 and eventually taking the set 25-23.

However, true to the nature of this exciting match, the teams took turns winning sets. The Aztecs called timeout down 23-21 in the fourth set, two points from losing the match, and rallied to the set win 26-24 on a crucial over-the-net call against Boise State that gave the Aztecs the set.

The Aztecs opened the fifth and deciding set on a 7-4 run that forced Boise State to call timeout. The Broncos responded to their coach and took a 11-8 lead before the Aztecs roared back to tie the score at 12. With the match hanging in the balance, the Broncos were able to take advantage and ended the set and match on a perfectly placed kill down the left sideline to take the set 17-15 and the match 3-2.

Sophomore Danielle Bolden was the MVP of the match for the Aztecs with 19 kills, four service aces and 24 points. Originally a defensive specialist, Bolden played out of her comfort zone to great success on Saturday.

“I’m not an outside hitter so this was really new for me but I just try and get in a rhythm and then once I got that, I added some heat to it and I’m good,” Bolden said after the match.

Both Bolden and head coach Deitre Collins-Parker thought the Aztecs played well enough to win and they just needed to get a few more bounces throughout the match.

“You can’t second guess anything, one less missed block or missed serve and we win that match,” Collins-Parker said. “A couple choices at the end of the game cost us a little bit, but (Boise State is) a really good team. They have some really great players and are really deep and we did a good job. So I’m really proud of what we did, disappointed that we lost, but I’m happy with how we’re playing right now.”

The Aztecs will look to bounce back when they take on University of San Diego on Tuesday.