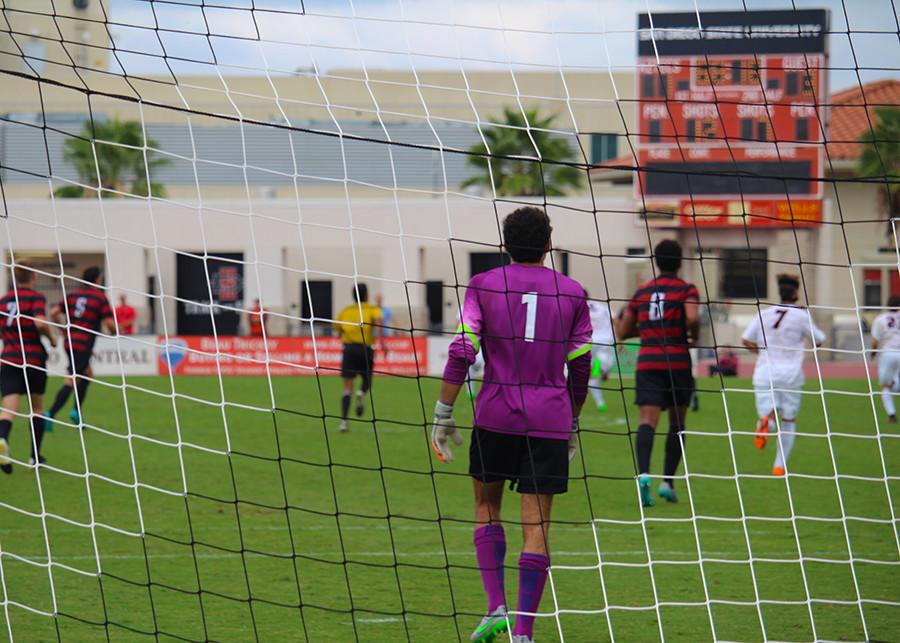 Coming off a shutout win against UC Berkeley, San Diego State men’s soccer fell 3-1 to No. 3 Stanford University as the Cardinal extended their winning streak to 11 games.

The Aztecs jumped out to an early 1-0 advantage when sophomore forward Jeroen Meefout stole a pass and delivered the ball to sophomore Dallin Cutler, whose shot took a deflection and Meefout collected the rebound off the goalkeeper and finished the chance.

The goal was Meefout’s third of the season, but this one held a special place in his heart. His parents flew in from his home country of the Netherlands to attend both weekend games.

“It’s great that they come over here and show their support,” Meefout said. “Even if they’re not here I know they’re watching. Even if the games aren’t streamed they’re watching the statistics at 3 a.m. back home. It was nice for me to score in front of them.”

The lead didn’t last long for the Aztecs as Stanford responded with back-to-back goals in the 11th minute to grab a 2-1 lead.

Morris didn’t waste the chance and evened the score 1-1.

The goal was Morris’s sixth in nine games this season. He has scored a goal in each of the last five games he’s played.

“Jordan Morris is a full international and is an excellent player,” SDSU head coach Lev Kirshner said. “His physicality, his technical ability, all that is going to make it a very long day. It was very well done by him.”

Morris set up the next goal when he made a run past the defense and crossed the ball from the left goal line.

After taking a deflection, the ball sat up for sophomore midfielder Corey Baird and he tucked the ball in the bottom left corner to give the Cardinal a 2-1 lead.

Stanford threatened again in the 29th minute and Morris was given another one-on-one opportunity with Allmaras. Allmaras saved the shot this time and kept the score at 2-1.

The score remained 2-1 at halftime with SDSU outshooting the Cardinal in total shots 6-5 and shots on goal 5-3.

Stanford extended its lead in the 55th minute when freshman midfielder Sam Werner made a run into the SDSU defense and laid the ball off for Baird, who hit a curling shot into the top right corner of the goal to make the score 3-1.

SDSU outshot Stanford 8-5 in the second half, but failed to generate many quality scoring chances against the stout Cardinal defense.

SDSU has been outscored 9-2 in its first five Pac-12 games.

“I came here, and most of the guys came here, to play the good teams,” Meefout said. “We want to beat Stanford and I think we’re able to beat these kind of teams so I’m  looking forward to the next few games.”

The Aztecs head out on the road to take on Cal and Stanford next weekend and try to improve their 1-3-1 road record.