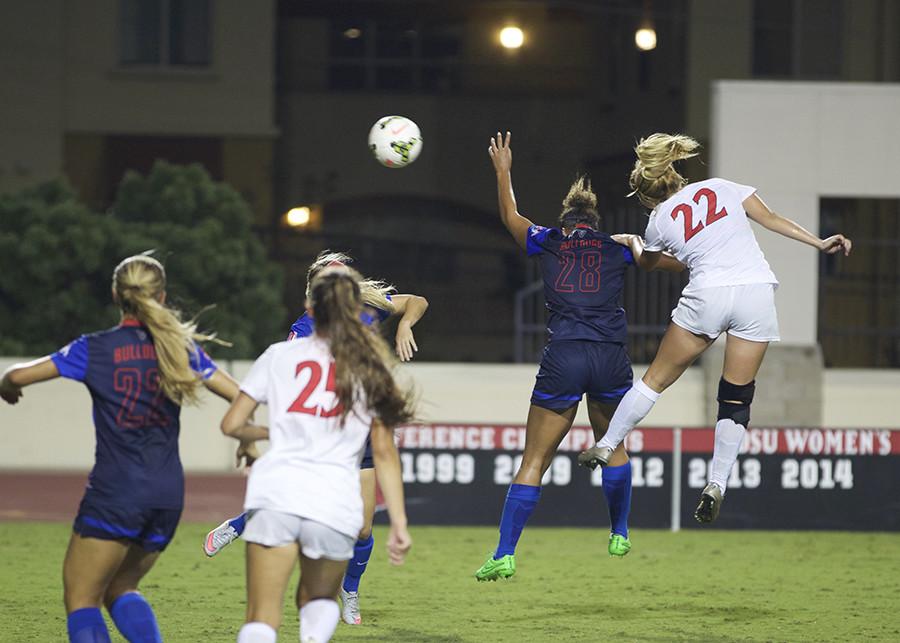 Less than 24 hours after the two school’s football teams played each other, San Diego State and San Jose State matched up for a women’s soccer duel on Sunday, with the Aztecs winning 2-1.

With the win, SDSU moved into first place in the Mountain West heading into the final two weeks of the regular season.

“Lauren (Hanson), their head coach, has done just a great job of building a program,” SDSU head coach Mike Friesen said. “You could see toward the end of last year the improvements their team was making. I think they’ve exceeded almost everybody’s expectations.”

After the bittersweet ceremony, it was time for the most anticipated match of the season.

SJSU drew first blood in the fourth minute on a goal from sophomore forward Dorthe Hoppius.

Hoppius was able to head the ball past Vaughn, after a long throw-in from junior midfielder Carley McBeath.

It was the second game in a row that the Aztecs fell behind, and only the second deficit they faced all year at the SDSU Sports Deck.

But the early goal from the Spartans didn’t rattle the Aztecs, as they pulled even a minute later.

Sophomore defender Jen Rupey sent a ball into the box and found sophomore forward Aliyah Utush on the far post, who finished it into the back of the net.

The assist from Rupey was a good sign, considering she suffered a broken nose Friday night, forcing her to wear a protective mask in Sunday’s match.

“I’m just always told to go to the back post,” Utush said. “When I saw Jen lining up for the cross, I knew that I should be in there and that’s where I’m supposed to be. The ball came perfectly to me and I just finished it.”

It was Utush’s fifth goal on the season, which tied her with freshman forward Milan Moses for third on the team.

The two teams played an extremely physical and fast-paced match.

In the 32nd minute, the physical play caught up with the Spartans and senior forward Darlene Rodriguez picked up a yellow card.

The two teams headed into the locker room at halftime with the score tied 1-1 and the shot totals knotted up at six.

SJSU had a great opportunity to reclaim the lead at the beginning of the second half on a free kick in the 47th minute, but Vaughn was able to make the save.

The Aztecs would get their golden opportunity as well, and would not let it go to waste.

After what may have been a missed call by the officials in the 55th minute when Moses was taken down in the box, fellow freshman forward Leah Pruitt took matters into her own hands.

Pruitt swiped the ball from a Spartan defender in the box, turned around, and fired past senior goalkeeper Zoe Makrigiannis to give the Aztecs their first lead of the day in the 56th minute.

Unfortunately for SJSU, Makrigiannis was injured on the play. She would be replaced and didn’t return.

The Spartans received a second yellow card in the 66th minute, this time to senior defender Rachel Docherty.

The Aztecs would also receive a yellow card in the 72nd minute, after a violent tackle from Moses on the far sideline.

With a 2-1 lead, the Aztecs’ defense played extremely tight, making it difficult for the Spartans to scrounge up any last attempts.

The defense held off Spartan freshman midfielder Darriell Franklin, who has six goals on the season.

“We shut her down today,” Utush said.

The defensive play payed off and the Aztecs found themselves in first place in the conference when the final horn sounded.

“We’re happy that we got the result,” Friesen said. “Obviously that puts us in a really good spot for the next few games here to go after our fourth (MW regular season) championship in a row.”