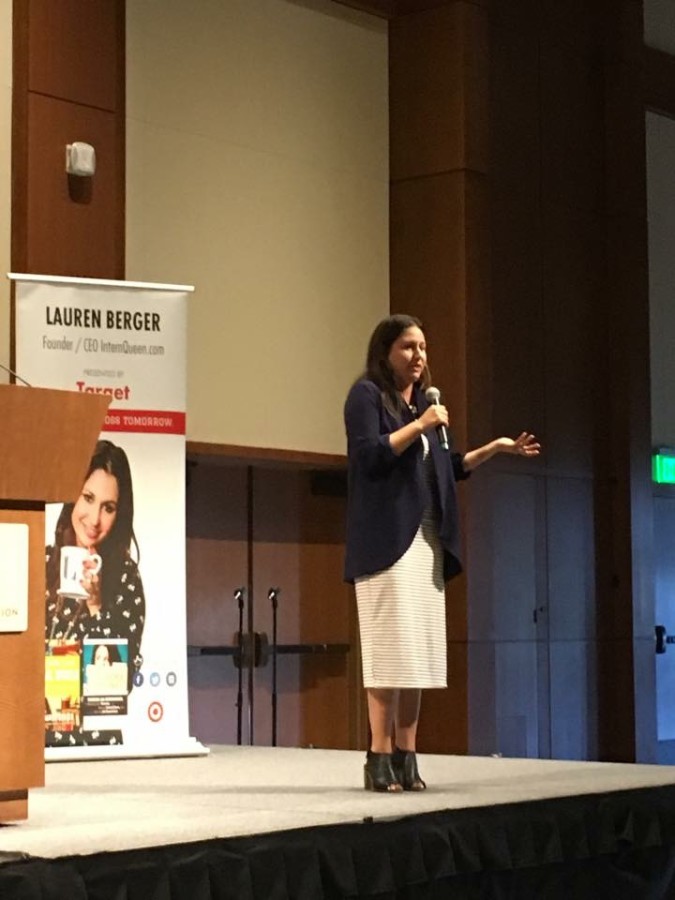 CEO and founder of InternQueen.com Lauren Berger gave a presentation on internships on the San Diego State campus last week.

The SDSU Career Services event, sponsored by Target and the Undeclared College Council, aimed to inspire students to leverage internship experiences into a career. “Intern today, Boss tomorrow,” was the event’s tagline.

“But just because we have an interest, sometimes it’s hard to actually take our interest and make it happen,” she said. “I think (Berger) is someone who will really be able to motivate students by her own experience, and really just talking honestly about what she’s done and how it’s helped her.”

Berger founded InternQueen.com in 2009 after she completed 15 internships as an undergraduate. Her website and book, “ALL WORK NO PAY: Finding An Internship, Building Your Resume, Making Connections, and Gaining Job Experience,” gives young people advice on how to succeed professionally.

Berger began the event by sharing her personal story, and how she balanced 15 internships while in college. The key to her success was rejection, Berger said. As an undergraduate, Berger was rejected 117 times before receiving her first internship in New York City.

“I have news: You are going to be rejected forever,” she said to SDSU students. “People think I’m successful, but I get rejected all the time. I get rejected so much that I’ve learned it’s part of the process.”

Berger encouraged students to go after what they want.

“Every time I’ve put myself out there, I’ve gotten to where I want to be,” she said.

Berger said she hoped students were inspired by the talk.

More than 90 students attended the free event in Montezuma Hall.

“It gave a lot of good information, good tips and tricks not only on how to get internships, but also good career advice,” psychology junior Marcus Lewis said.

The presentation was part of a 12-school tour sponsored by Target. SDSU was chosen because it is a big school that Target recruits from, Berger said.

Although Target brought in the guest speaker, the Undeclared College Council organized the on-campus event. The council helped promote the event on campus, as well as reserve the room.

Linda Dawood, vice president of marketing for the Undeclared College Council, thought the event would be beneficial for all students looking to find their passion.

“It’s important to have an event like this so people from all different majors learn about internships and different career paths that they could take,” she said.