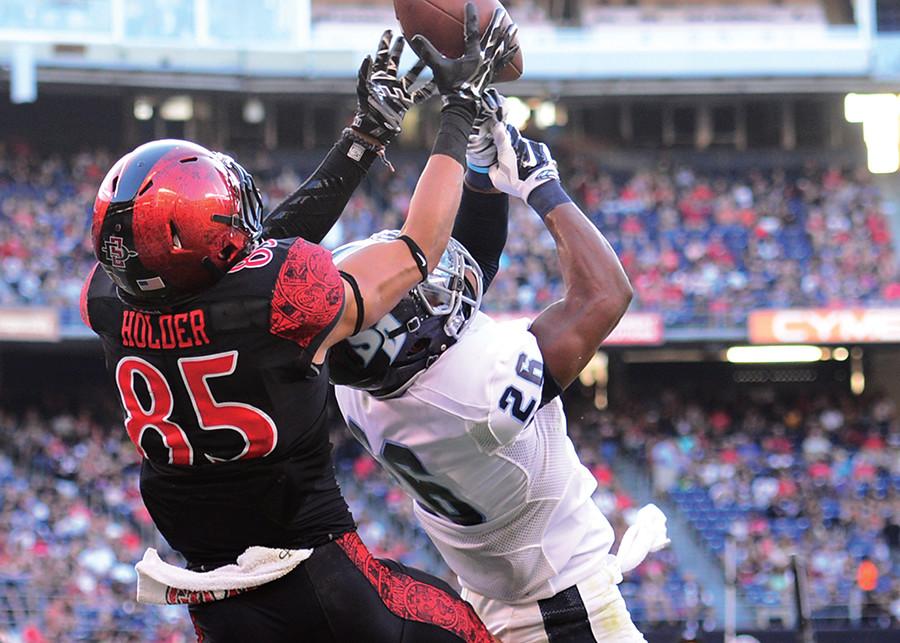 That’s just par for the course, though.

His older brother King played defensive back for the Aztecs from 2010-13 and at 5-foot-10, 165 pounds, was one of the smallest players on the team.

Mikah’s twin brother Alijah plays defensive back for Stanford University and is the tallest of the trio at 6-foot-2.

King left with one year of eligibility after the 2013 season and proceeded to graduate in order to pursue his business ventures. However, he had laid down a solid blueprint for Mikah on how to get things done even with a height disadvantage.

“He was tenacious on defense,” Mikah said. “When I came here, all the older guys would tell me has was the nastiest guy on the field. When I came here I tried to take that same mentality. I’m not trying to be afraid of anybody when I’m on the field.”

Even though King said he had no influence on his brother picking SDSU over University of Utah, he was able to give Mikah some insight on how the Aztecs took care of business.

“I told him the No. 1 thing you need to know about this program is that you need to be physical and fight every play,” King said. “That was completely his decision, though. I’m happy that he’s continuing our legacy at SDSU.”

Mikah was initially redshirted to begin his freshman year, but due to injuries he was pressed into action and caught five passes for 53 yards over 10 games.

After a solid spring, he emerged as a top receiving threats heading into 2015.

He leads the team’s wide receivers in receptions and is tied with senior wide receiver Eric Judge in touchdowns with two.

“I felt the confidence coming into this season that I could play with anyone thanks to that experience last year,” Mikah said. “It was cool being thrown into the fire like that. It helped me learn a lot.”

Both brothers attended local football powerhouse Oceanside High, and they are far from the only two to make the transition from Oceanside to SDSU.

Senior cornerback J.J. Whittaker and senior linebacker Jake Fely played with King in high school and have been mentors for Mikah in the early stages of his collegiate career.

“J.J. and Jake were leaders at Oceanside so I already looked up to them when I came here,” Mikah said. “Jake just goes all-out on every play, and J.J. is the tough leader that every football team needs. They’ve definitely been role models for me.”

King still attends almost every home game to watch his brother and root on his former teammates. He’s happy Mikah is getting a chance to make his own legacy as an Aztec.

Even though there was an opportunity for both brothers to play on the team last year, Mikah understood King’s decision.

“I support whatever he wants to do,” Mikah said. “He thought football was done for him, but he still supported me and wanted me to play. He’s out there every Saturday. He still loves Aztec football.”

No matter what Mikah does on the field, it’s tough for King not to be proud seeing his brother play football and continue his education.

“He’s out there getting an opportunity that most football players don’t get and he’s making the most of it,” King said. “Even if he doesn’t have the best game or season it doesn’t matter, he’s taking the steps to a bright future by going to school.”

Catching Mikah without an ear-to-ear smile is about as likely as seeing him get outplayed physically by a defensive back.

With the two more years on the Mesa after this season, he has head coach Rocky Long smiling, too.

“I think he has a lot of potential to be a great receiver,” Long said. “He’s got a ways to go, but the physical potential is definitely there.”