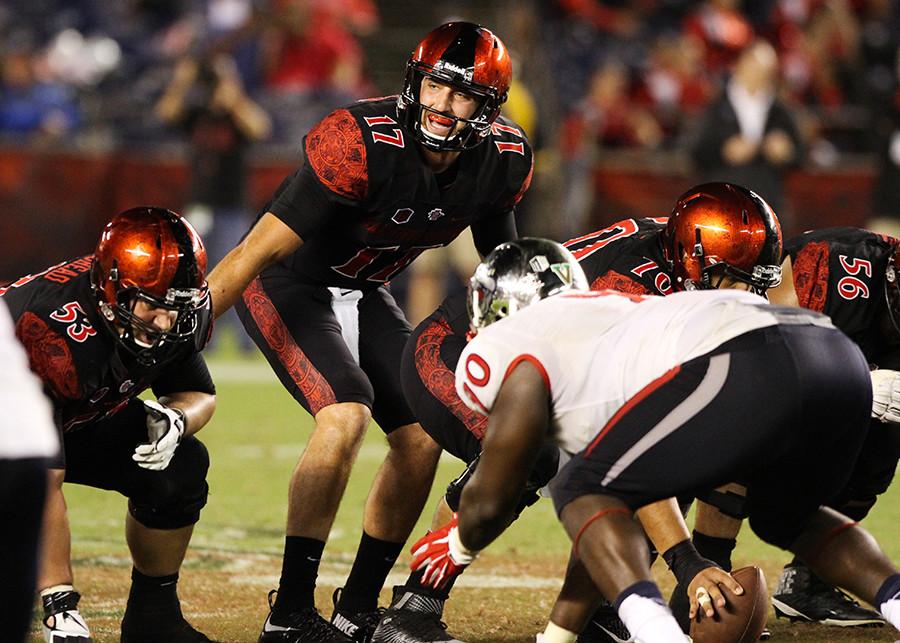 The title of the best in the Mountain West will be on the line Friday night when the San Diego State Aztecs (4-3, 3-0 MW) host the Utah State Aggies (4-2, 3-0 MW) in a matchup of the conference’s divisional leaders, who both boast perfect conference records.

“I think our team is pretty excited about Friday night,” SDSU head coach Rocky Long said. “Obviously we have great respect for Utah State because they’re playing really well. What they did to Boise State last week was pretty impressive, so we know it’s going to be quite a challenge.”

That pretty impressive 52-26 win over then-No. 21 Boise State last Friday was spearheaded by the Aggies’ impressive defensive unit that forced eight Bronco turnovers — seven in the first half — that led to 35 Utah State points.

The linebacker duo of junior Nick Vigil and senior Kyler Fackrell fronted the victory, as they combined for 25 tackles, including five tackles for loss, three fumble recoveries and two forced fumbles.

While the Aztecs didn’t beat the same quality of opponent or put up the statistics Utah State did, they also won behind a formidable defensive effort against San Jose State.

SDSU entered that game aware the Spartans sported one of the nation’s top statistical players in senior running back Tyler Ervin. It responded by limiting the then second-leading rusher in the country to 22 yards on 17 carries and he lost a yard on three catches.

The Aztecs held SJSU to 148 total yards, forced 11 tackles for loss and had four sacks — three of which came from junior linebacker Calvin Munson.

SDSU and Utah State’s defensive dominance last week, however, was not a coincidence as both teams have ratcheted up their level of play in conference action.

The Aztecs are first in nearly every defensive statistical category in MW play, including scoring defense (9.3), total defense (162.7) and rushing defense (33.3). SDSU has also eclipsed 200 yards rushing in all three conference games and is only one of two teams that has yet to throw an interception — Utah State being the other.

On the other hand the Aggies have dominated the scoreboard as they outscored their three conference opponents 141-58 with an average scoring margin of 27.7 points per game. Not surprisingly they also hold the best turnover margin at plus-13.

With a game of this magnitude and the prowess of both teams, every day of preparation counts. However, due to the Aggies playing last Friday, they received an extra day of rest and more importantly an extra day to familiarize themselves with this Aztec team.

“I don’t think there’s any issue with us being ready to play mentally or emotionally,” Long said. “We’ll be ready to play. I have some questions assignment-wise whether we’ll be as ready to play as they are because of the one less day of practice. I’m concerned about that.”

That concern is warranted as the Aggies have one of the stingiest defenses and intricate offenses the Aztecs will see all season.

Where the Aztecs have relied heavily on junior running back Donnel Pumphrey and the rushing game, the Aggies are one of the country’s best in smothering the run. Utah State has limited four of its six opponents to fewer than 100 yards rushing behind an athletic defensive line and a top-notch crop of linebackers.

But where SDSU will face the toughest challenge is on defense, as it has to contain dual-threat sophomore quarterback Kent Myers.

“It’s almost like you’re playing a wildcat team,” Munson said. “He runs a lot. He pulls it from his running backs. He’s almost as big of a threat to run as he is to (hand off). We’re going to have to be really disciplined this week.”

Since Myers took over three weeks ago for starting senior quarterback Chuckie Keeton, who suffered a season-ending knee injury, he is fifth in the conference in rushing and passing.

Some teams and players would try to prepare for this game as any other and avoid mentioning its possible implications. The Aztecs are not of that mindset.

Let the battle for the best in the Mountain West begin.

Sophomore linebacker Fred Melifonwu, who returned from a six-game suspension in last week’s win at San Jose State, quit the team Wednesday night, according to multiple media reports. It’s unknown at this time why he quit.